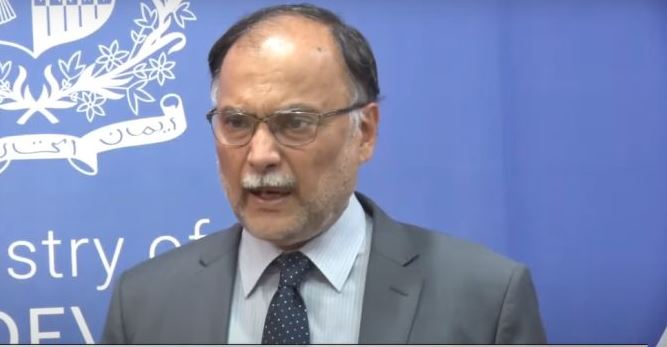 ISLAMABAD, Minister for Planning, Development and Special Initiatives Ahsan Iqbal Monday said Prime Minister Shehbaz Sharif’s visit to China would take the bilateral trade relations to new heights as both the countries would sign multiple projects worth billions of dollars.

The PM’s visit to China will help preparing a road map to take the county’s annual exports to $100 billion and beyond, the minister said while addressing a press conference here. He said during the visit, Pakistan would sign an agreement with China to seek first hand technical experience from the all weather friendly country.

He said China, on many occasions have expressed its desire to help Pakistan making industrial economy but unfortunately

On October 27, meeting of the JCC was held virtually in which the CPEC projects were reviewed, and both sides agreed to expand the scope of the project and to expedite work of ongoing projects under CPEC. It was also agreed that the final agreement would be signed during visit of Prime Minister Shehbaz Sharif to China.

Ahsan Iqbal highlighted that Pakistan’s most important project was the railway’s ML-1 as the existing system had become outdated therefore this project would have to be initiated on emergency basis.

Unfortunately, he pointed out that due to the criminal negligence of  the previous government, this project witnessed zero progress during last several years which also caused increase in cost by $3 billion from earlier approved cost of $6.8 billion to $9.8 billion.

Further, he informed that a new road project of Karachi-Hyderabad motorway would also be signed during the visit and the work on new motorway between Karachi and Hyderabad would start after the visit.

Similarly Karachi’s KCR project would also be signed during the visit to provide the citizens state of the art transportation facility in line with the orange train in Lahore.

Dera Ismail Khan-Zhob road project and Mirpur-Muzafarabad-Manshehra road project are also likely to be signed under CPEC, he said adding that Babusar tunnel project has also been included in the CPEC.

He said the both countries would also sign a project to establish national forensic laboratory in Islamabad to help the security institutions to cope with the extremism and terrorism by using the modern technology.

Ahsan Iqbal informed that an agreement for exporting agriculture products from Pakistan to China would also be signed besides inking a project to enhance the capacity of Pakistan’s meteorological department in forecasting weather.

This visit of Prime Minister is of utmost importance as it would not only bring the country out of isolation but would also boost economic ties with the world’s strong economy, he added.

Ahsan Iqbal said that through CPEC, the bilateral partnership turned to economic partnership and between the years 2013 and 2018 $29 billion worth of projects were executed with record speed.

More than 5000 MW energy projects were installed by China besides constructing hundreds of kilometers of road infrastructure including Havelian Thahkot and Multan-Sukkur motorways.

The dream of exploiting Thar coal mines has also been fulfilled with the help of China as over 1000 MW of electricity is being generated from local coal.