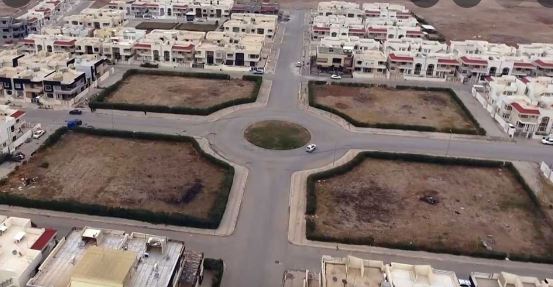 . The meeting was given a detailed briefing on the final master plan of the project and it was told that the housing scheme will be established on 1,86,400 Kanal of land out of which 41% area i.e 43.5 Kanal of land has been allocated for residential plots and apartments while 28% area has been allocated for the construction of roads. Similarly, 16% of area for Parks and open spaces, 7% for public buildings and 5% would be utilized for commercial activities and parking. Besides 2% area has been proposed for graveyard purpose.

Under the project, all those facilities have been planned which are indispensable for any modern housing society. According to the detailed master plan initially 62,056 residential plots of different categories have been proposed which include 16,312 plots of 3 Marla, 17,201 plots of 5 Marla, 3402 plots of 7 Marla, 9526 plots of 10 Marla, 13415 plots of 1 Kanal, 1494 plots of 2 Kanal and 706 plots of 4 Kanal. Some 8,000 Kanal of land has been reserved which would also be utilized for the provision of residential plots on the need basis. Other key features of the project also include Civil Secretariat, Media Enclave, Sports City, Education and Health City which will be equipped with state-of-the-art facilities of international standard. It was further informed that a mega park with the nomenclature of “Khyber Park” would also be established under the project which would have Cultural Villages, Gandhara Museum, Theme Park, Forest, Adventure Area and all other state of the art recreational facilities. Briefing about the Access Road alignment, it was told that Main Expressway along with service roads would be constructed whereas other approach roads already available in the different sides of the project would also be rehabilitated. The Chief Minister has termed this project as need of the hour in order to control the burden of increasing population in the provincial capital and directed the quarters concerned to ensure implementation of the project as per stipulated timelines. He also directed the quarters concerned to ensure issuance of intimation letters of plots to the owners of verified lands as per laid down formula within a week and made it clear that no delay would be tolerated to this effect. He further directed to speed up acquisition and verification of remaining land under land sharing formula adding that his government would go all out to complete this mega housing project as fast as possible. All the stakeholders would have to play their respective role well in time for the purpose, he remarked.