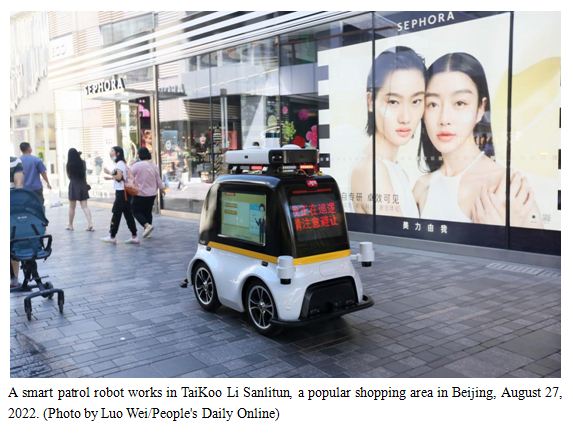 At the start of the new year, Qiuguo Hotel located near the China National Convention Center and the Asian Games Village in Chaoyang district, Beijing, saw its guest flow begin to recover.

At noon, the busiest time of the day for the hotel, a square-headed service robot attracted the attention of many people.

“Here comes the elevator. I’m your butler. Excuse me, please,” the robot said in a crisp voice while sliding steadily into the elevator.

After moving out of the elevator on the third floor, the robot stopped at the door of Room 8303, and made a call. “Master, your food has been delivered. Enjoy your meal,” it said over the phone to the guest of the room.

Liu Xiuxiu, the general manager of the hotel, is full of praise for the service robot, which is named Segway DeliverBot S2.

“Due to the COVID-19 pandemic, our hotel has been a bit short-handed. Fortunately, we have the robot. It has worked around the clock and taken care of most of the delivery tasks. It’s been such a great help to us,” said Liu.

Service robots like Segway DeliverBot S2 couldn’t have been so intelligent and reliable without the efforts of the people in the flourishing new profession – service robot management and maintenance technicians. It is one of the new professions recognized by Chinese authorities including the Ministry of Human Resources and Social Security in March 2021.

“To put it simply, we are the people who try to enable robots to better serve people,” said Yang Yue, a 30-year-old service robot management and maintenance technician of Segway-Ninebot, a Chinese high-tech company that has launched service robots including the Segway DeliverBot S2.

Just a few years ago, people were unfamiliar with the profession, according to Yang, who is in charge of the products in the commercial service robots division of Segway-Ninebot.

“I used to be an industrial designer. When I noticed that robots had been more and more frequently used in shopping malls and restaurants, I felt this could represent a trend in the future. So I took the initiative to change my career path and joined the service robots industry,” Yang said.

According to Yang, he has witnessed how service robots have played important roles in application scenarios including daily life care, security inspection, and epidemic prevention and control. The demand for talents who can upgrade the functions, operate and maintain the service robots has kept rising in recent years.

As an engineer, Yang needs to constantly adjust and optimize various functions of service robots.

“Service robots represent a type of new product, so they can inevitably encounter problems when they are first put into use. Our job is like building a bridge between service robots and people. We try to help service robots adapt to their application scenarios smoothly and provide considerate services for people,” Yang explained.

Although he works in the high-tech industry, what Yang cares about the most is not the technology itself, but how to make robots more thoughtful. In an effort to figure out how robots can help people better, Yang has spent a lot of time conducting field investigations and working in different positions.

“I hope that robots can truly bring convenience and happiness to people and contribute the strength of artificial intelligence to people’s lives, rather than providing mechanized services,” Yang said.

The implementation of measures for the prevention and control of the COVID-19 pandemic has posed challenges while presenting opportunities to the robot business.

Because of their advantage of providing contactless delivery services, service robots have been increasingly popular among consumers at home and abroad, and Segway-Ninebot has quickly increased the sales of its products.

The hard-won technological research results achieved by Yang and his colleagues are being translated into new features of products.

“For example, the vision-based multi-sensor indoor positioning technology we have developed can enable robots to intelligently recognize subtle differences between different floors so that they won’t go to the wrong floor,” said Yang.

With the help of devices including laser radar, acoustic sensor, and collision sensor, the service robots developed by Yang’s company can realize centimeter-level obstacle avoidance, becoming safer and more reliable.

Through unremitting efforts, the company has developed many application scenarios of robots, such as the delivery of medicines in hospitals, the delivery of objects in hotels, and serving food in restaurants.

As robots are more and more widely used, the market demand for talents with relevant professional skills increases with each passing day.

The intensified efforts to cultivate new professions like service robot management and maintenance technicians have mirrored the surging vitality of China’s high-quality development, and signaled that the country’s supply of human resources is moving toward higher level and quality, according to He Zhiyong, technical director of the product research and development department of a robotics company based in Beijing.

“Speeding up the cultivation of service robot management and maintenance technicians can not only enable robots to free humans from simple and repetitive tasks, but boost the creation of a good number of new jobs featuring creativity and high added value. This can help tackle structural unemployment and build a more competitive workforce,” He told People’s Daily.

Pakistan will continue to support the struggle of people of IIOJK: Mushaal