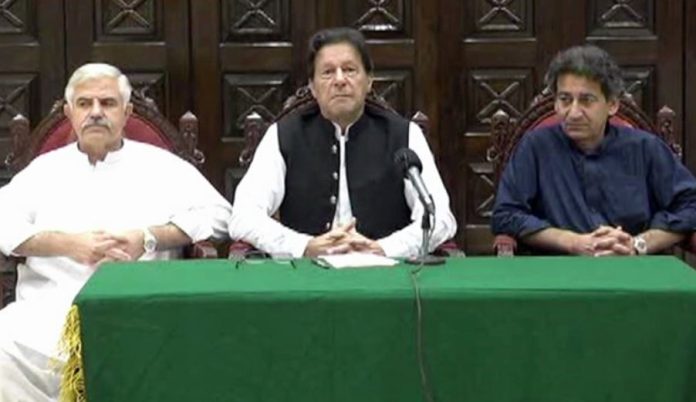 ISLAMABAD: PTI Chairman and former prime minister Imran Khan on Friday dispelled reports that he had struck a deal in exchange for ending the party’s Azadi March, saying that he did so in order to avoid bloodshed.

He expressed the views while addressing a press conference in Peshawar, adding that he would take to the streets again if early elections were not announced. He regretted how police officials attacked the participants of the march, blaming the government for hand-picking officers to target the PTI.

“Our workers asked why we did not stage a sit-in. I am the man who staged a sit-in for 126 days. It was not difficult for me, but by the time I reached I became aware of the extent of the situation […] I knew that day that there would be bloodshed.”

Imran said the people were “ready” after seeing the “terrorism” carried out through the police. “Everyone was ready to fight, some of our people were so angered by what they saw,” he said, adding that officials were instructed to brutalise protesters.

“The anger at the time, if I had staged a sit-in that day I can guarantee that there would have been bloodshed,” he said, adding that there was a prevailing sense of hatred against police officials.

“But the police is also ours, it is not their fault,” the PTI chairman said, blaming the government for issuing the directives. If there was violence then it would only have caused chaos in the country, he said.

“Do not think it was our weakness and don’t think that a deal was made. I am hearing strange things that a deal was made with the establishment. I did not make a deal with anyone,” he said, adding that the only motive behind his actions was concern for the country.

He also made it clear that the PTI would not negotiate with or accept the “imported government”.

“I think of this as a jihad. I will stand up against this as long as I am alive,” he said, reiterating that he only cared about the future of the country.

Imran again stressed on his six-day ultimatum to the government for the announcement of early elections. “If they do not clearly announce a date for the elections or for the dissolution of the assemblies, I will take to the streets again. Let me make it clear, this time we will be prepared.”

He said that protesters were not prepared for the way they were attacked by the police. After the Supreme Court issued the order, we thought all the blockades would be removed and there would be no issue with the police, he said.

Imran claimed that the government was “afraid”, pointing out how they pressurised media channels and slowed down internet services. “No one knew what was going on. There was confusion.”

He also termed his party workers “heroes” for taking to the streets in the national interest. “You came out for the country’s haqeeqi azadi (true freedom).”