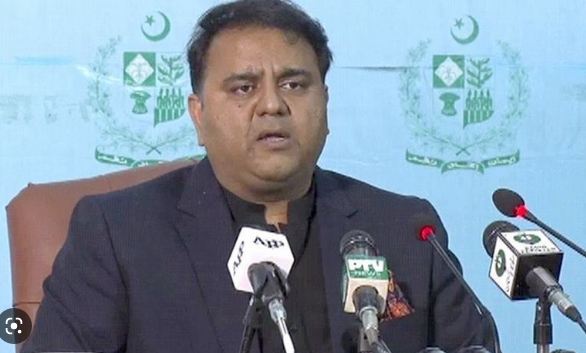 States bombs, missiles no solution to every problem

ISLAMABAD: Pakistan Tehreek-e-Insaf (PTI) Senior Vice President Fawad Chaudhry termed the idea of installing a technocrat setup a ‘joke’ and added that a free, transparent and immediate general elections was the only solution to pull the country out of the prevailing quagmire.

Addressing a press conference here on Wednesday, Fawad Chaudhry stated that technocrat government could not solve the country’s current issues, as they would plunge the country into a quagmire of problems and then would run away.

Fawad Chaudhry said that the proposed idea of importing a technocrat from the US or somewhere was a result of the failure of Shehbaz Sharif’s government.

He said that the idea of sending the current PDM government packing and installing a long-term technocrat government would be another stupid idea and such joke with the country must be come to an end.

He stated that making such schemes just to stop Imran Khan from coming into power.

Fawad Chaudhry went on to say that PTI would not only fully condemn any such idea but under any circumstances, a system beyond the Constitution was not acceptable and would be resisted any such attempt come what may.

He stated that the best solution was general elections, as if the government falls, the Constitution had a solution, adding that the current economic crisis was the result of the political quagmire and not vice versa, contending that elections would bring the much-needed political stability.

Lashing out at the PDM government, Fawad Chaudhry said that the cabal of thieves had no interest of running country’s affairs, as their sole focus on to do away with their corruption cases and to visit foreign countries.

Talking about PTI’s MNAs resignations, Fawad Chaudhry said that all the PTI members stood up and resigned on the floor of the House but the NA speaker did not accept the resignations. “When we ask to appear before the speaker, he runs away,” he added.

He revealed that it was decided in Javed Hashmi case that if someone resigned in the House, the resignation would be accepted.

He stated that NA Speaker and chairman senate were prestigious positions worldwide, but in Pakistan, the current Speaker of the National Assembly and the Chairman of the Senate did not take care of the dignity of the positions since small people sat on big chairs.

Fawad Chaudhry stated that PTI members did not get any salary and benefits after resignations, fearing that their salaries might be taken by the PDM group.

He said that the speaker and cabinet members were on foreign trips, adding that it was revealed that Rs. 1.7 billion was spent on Bilawal foreign trips.

Fawad Chaudhry appreciated the lawyers’ stance on the case of Azam Swati.

Talking about Afghanistan situation, he said that Bilawal Bhutto did not understand the situation in Afghanistan, as if the situation deteriorated there, Pakistan could not protect itself from its negative implications.

He flayed the imported government for the alarming upsurge in terror incidents, and said that PTI Chairman Imran Khan was the only respected Pakistani leader in Afghanistan because his hands were not stained by the blood of Afghan people.

Fawad Chaudhry stated that FATA was merged but the imported government did not spend a penny on the uplift and development of the long-neglected area, adding that the government even did not give money for police setup in the region.

He stated that bombs and missiles were not the solutions to everything and that matters had to be solved through dialogue.

Fawad Chaudhry went on to say that cabinet meeting never got a briefing on Afghanistan situation and on the merger of the FATA, adding the interior minister Rana Sanaullah could only be seen shouting here but he did not visit once Wana to hear public issues.

Fawad Chaudhry said that said that USA, China, Australia and Saudi Arabia issued travel advisory for Pakistan, as these countries told their diplomatic staff not to go to five-star hotels.

Talking about the country’s economic situation, Fawad Chaudhry said that dollars were not available in the country and there was a shortage of gold. He stated that people started buying gold, but now gold was not available, adding that the country needed dollars while ministers were on foreign tours.

Fawad Chaudhry said that Shahbaz Sharif went China with 43 people, but China said that they would host only five of them and pay for the rest.