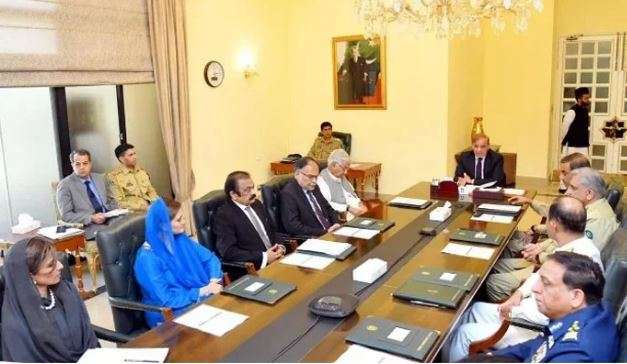 ISLAMABAD: The National Security Committee (NSC) Friday took stock of the security situation in the country after terrorists attacked a school van in Swat, leaving the driver dead and a student injured.

The NSC met at the Prime Minister’s Office under the chairmanship of PM Shehbaz Sharif, with federal ministers, lawmakers, services chiefs, and heads of intelligence agencies in attendance.

In the meeting, according to a statement from the PM’s Office, officials of the country’s security apparatus gave a briefing on the security situation — in light of the recent terrorist activities.

The meeting made it clear that the blood of every citizen is precious and noted that the law will strictly deal with those involved in the bloodshed of innocents.

“Our citizens rendered unprecedented sacrifices along with the armed forces and played a historic role in the war against terrorism,” read a statement.

The nation and state institutions are on the same page for the protection of the lives and properties of the people, the geographical integrity of Pakistan and for the rule of law.

The forum decided to constitute an apex committee headed by PM Shahbaz and revive the National Counter-terrorism Authority (Nacta), which will work in collaboration with the provincial-level counter-terrorism departments to prevent any resurgence of terrorism in the country.

It added that Nacta would coordinate with the provinces to ensure the security of the projects.

The anti-terrorism system will be upgraded and equipped with the latest technology, the meeting decided and vowed to ensure provisions of resources in this regard.

The meeting praised the armed forces, rangers, police officers, and personnel from other law enforcement agencies (LEAs) for sacrificing their lives in the line of duty.

The PPP meeting, Rehman said, condemned the attack in Swat.

“PPP’s policy is to fight and raise voice against terrorism. Benazir Bhutto shaheed was a victim of terrorism. She believed the only flag that will rise in Swat will be that of Pakistan,” Rehman said.

The PPP leader termed the terror attack in Swat as barbaric and said that her party extends solidarity to the victims, and stands with them.

As the party strongly and consistently condemns any sort of extremism and militancy, Rehman stressed that PPP does not want to see terrorism rising again in this country.

“We are alert about this, and we have raised this issue at the cabinet level. Attacking schools and children is something our religion doesn’t allow, not even humanity allows it,” Rehman said.

The federal minister said that Pakistanis have paid the price and the nation has won a war, for which it never received any recognition.

“Counter-terrorism is the hardest form of warfare — it is like eating soup with a fork. Now when terrorism is rising again in our country, it is important for us to condemn and rise against it.”