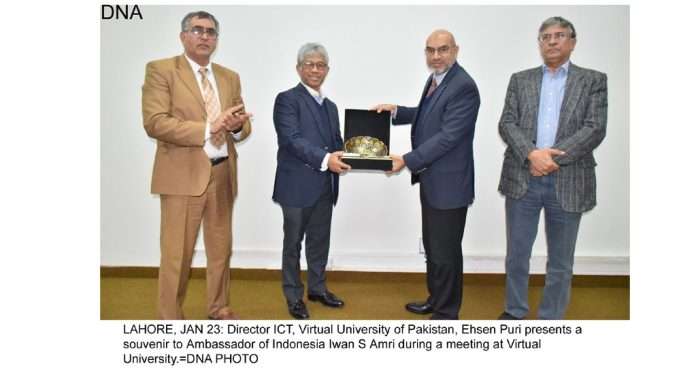 LAHORE, JAN 23 (DNA) -Since 2010, the Government of Indonesia has provided scholarships to Pakistani students through 2 schemes, namely Darmasiswa for non-degree program and Developing Countries Partnership (KNB) for master degree.

There are also scholarships given by several well-known campuses from Indonesia.

Ambassador of Indonesia Iwan S Amri disclosed this during his interaction with students and faculty of Virtual University Lahore.

He further said, the number of Pakistani students receiving Indonesian scholarships is increasing every year. At present there are 66 scholarship recipients from Pakistan, 32 of them have completed their study.

The ambassador told the DARMASISWA program was started in 1974 as part of ASEAN (Association of South East Asian Nations) initiative, admitting only students from ASEAN.

However, in 1976 this program was extended to include students from other countries such as Australia, Canada, France, Germany, Hungary, Japan, Mexico, the Netherlands, Norway, Poland, Sweden, and USA.

In early 90′s, this program was extended further to include all countries which have diplomatic relationship with Indonesia. Until to date, the number of countries participating in this program is more than 185 countries.

As per the scholarship, the students get settlement allowance when attending the Orientation Program. Students legal permit arrangement with the help of the Host University will be supported by Ministry of Education and Culture.

Additionally, Students may seek assistance from Host University in finding a house/room to rent which is included in monthly stipend.

Asma Safdar, alumni of KNB scholarship shared her views about Indonesia and her experiences and termed the program highly beneficial and rewarding. She wished to visit wonderful Indonesia whenever she would get a chance. =DNA