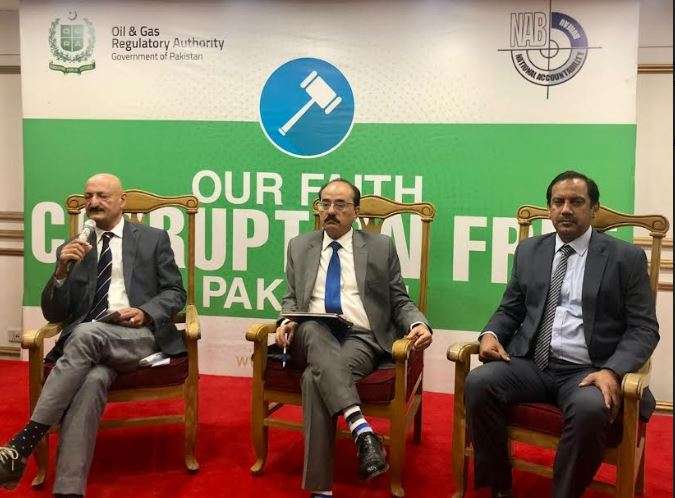 Islamabad, OCT 12: A seminar on “Our Faith Corruption Free Pakistan” was conducted by Oil and Gas Regulatory Authority (OGRA) in collaboration with National Accountability Bureau (NAB) which was attended by senior management of NAB and OGRA jointly. The event was conducted to create awareness against the evils of corruption and how public sector organizations can play thier part in the eradication of this evil.

Mr. Masroor Khan, Chairman OGRA welcomed the participants and informed that the definition of corruption requires to be revisited in its true sense as merely using delaying tactic in official task is also comes under the umbrella of corruption. He further added that corruption is one of the root causes of poverty, conflict and state fragility. It undermines the states’ ability to effectively deliver services and maintain the rule of law, affects the business climate and stands in the way of sustainable economic and social development.

Mr. Tariq Hamid Butt, Director General NAB has informed that the reserves of Pakistan are depleting rapidly and we have to control the unaccounted losses to economy and join hands to play our role in eradicating this menace. He emphasized to bring transparency in the processes which will create better service delivery ultimately making the system work efficiently.

The audiences have put many questions to the NAB guests regarding investigation processes and harassment which were responded appropriately.