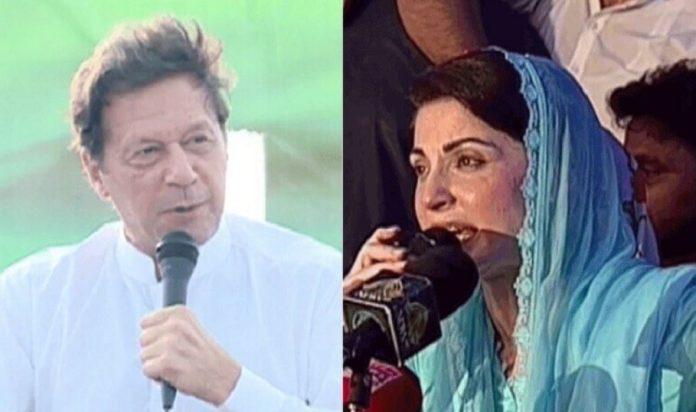 ISLAMABAD: Political arch-rivals PTI and PML-N made a last-ditch on Thursday attempt to woo voters in Punjab, ahead of Sunday’s high-stakes by-elections, with PTI Chairman Imran Khan and PML-N Vice President Maryam Nawaz made whirlwind stops in several constituencies on the last day of campaigning.

The by-elections on 20 seats of the Punjab Assembly — which Imran has characterised as a battle for “good versus evil” — are due on Sunday.

The 20 seats are among 25 vacated (five reserved) by the ECP after PTI dissident lawmakers voted for Hamza Shehbaz in the Punjab chief minister’s election, which amounted to defection.

The stakes are especially high because the outcome of the elections will determine who will become chief minister in Punjab, the re-election for which will be held on July 22.

Both parties have been claiming that their victory is assured.

In his address to workers and supporters in Faisalabad today, Imran’s messaging continued to centre on his criticism of the “corrupt” coalition government and his claims of the “US-backed conspiracy” to oust his government, peppered with cricketing euphemisms.

He said he would face his rivals “till the last ball” and insisted his party would emerge victorious in the by-polls.

“You have to come out on July 17 in large numbers to support the PTI,” Imran said.

He called out the government and incumbent leaders for being “co-conspirators” in a plot allegedly hatched by the United States to topple the PTI-led government.

“We also spent two-and-a-half years with the International Monetary Fund (IMF) but we managed to control inflation,” Imran claimed, as he lashed out against Prime Minister Shehbaz Sharif for allegedly bowing to the pressure from the global lending agency.

Imran said the US “imposed” the current rulers on Pakistan as it wanted a “yes man” in power. “Do you think the US wants to see a progressive Pakistan? Certainly not,” Imran told the rally.

He vowed that all “turncoats” would see themselves “thrashed with the bat” — PTI’s party symbol.

He also warned that the government “would break all records of rigging” and urged the masses to “foil this plot designed by Hamza Shehbaz”.

The ex-PM claimed the PML-N was sensing PTI’s victory, hence “it will resort to rigging to turn the results in their favour”.

Imran said he would visit the city again to celebrate the triumph of his party in the by-elections.

Meanwhile, at a workers’ convention in Lahore, PML-N Vice President Maryam Nawaz said the by-elections were not a war between PML-N and PTI, but they were a “battle for the development of Lahore”.

She said that in the last four years, the PTI had turned the city into a “dungeon”. “Lahore had been left to fend for itself,” she added.

“But thank God it is now back in the hands of those to whom the city belongs to,” Maryam remarked, promising that the “lions will bring prosperity and growth back in the city”.

Taking a dig at PTI chairman, she urged people to ask him: “Who is Niazi campaigning for? Where is the puppet Buzdar he had imposed on the people of Punjab?

“Let me tell you: He is hiding because he knows he has failed the people of Punjab.”

Maryam further urged the people of Lahore to step out of their houses on July 17 and vote for PML-N.

“Come out and I promise you won’t be disappointed. Together, we will reach new heights of growth and success,” she vowed.

Towards the end of her speech, the PML-N leader announced a “good news” for the people of Lahore.

“Prime Minister Shehbaz has told me that if the international oil prices keep declining, he would further slash fuel prices.”

“My people, the times of difficulties have gone,” Maryam added.

Their back-and-forth continued online as well — this time on the topic of journalist Imran Riaz Khan, with the PTI chairman tweeting a video of him.

“Imran Riaz was kept in a cage, where civilised countries would not even allow animals to be kept,” he said.