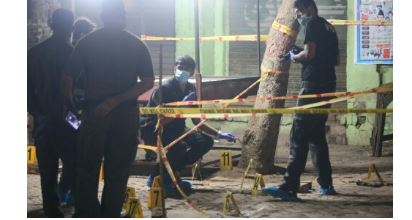 Seven people, including former prime minister Imran Khan and other party leaders, were injured and a party worker was killed in a gun attack on the PTI chief’s container as his convoy reached Wazirabad’s Allah Wala Chowk on Thursday.

The Punjab police said the deceased has been identified as Muazzam Nawaz.

“It was a clear assassination attempt. Khan was hit but he’s stable. There was a lot of bleeding,” Fawad Chaudhry told Reuters. “If the shooter had not been stopped by people there, the entire PTI leadership would have been wiped out.”

The Punjab police confirmed that a party worker, who was in the city to welcome the caravan — which was there for the party’s second iteration of its “Azadi” march — was killed in the attack. Meanwhile, a suspect was also taken into custody from the site.The injured include PTI leaders Ahmed Chattha and Chaudhry Yousuf, and party workers Omer Meyer and Rashid.

Senator Javed, who was also wounded and had blood stains on his clothes, toldfrom the hospital: “Several of our colleagues are wounded. We heard that one of them is dead.”

Following the firing, Imran Khan was immediately shifted to a hospital in Lahore, according to Reuters, while the other injured were taken by ambulances to the nearby Wazirabad Institute of Cardiology.

According to rescue officials and PTI, ten people were injured due to the firing, including the PTI officials. Reports also said that one child was included in the injured people.

Footage on television showed an injured Imran Khan waving to supporters after reportedly being shot and then being carried to his bulletproof pickup truck. In separate footage broadcast on television, one alleged assailant could be seen being subdued by party supporters and subsequent photos showed him being taken away by policemen.