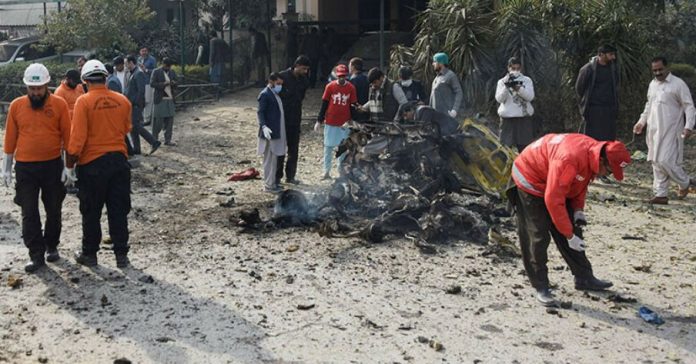 A policeman was martyred and at least six people — including four police officers and two civilians — were injured in a suicide blast in Islamabad’s I-10/4 sector on Friday, police officials said.

Television footage showed the fiery wreckage of a vehicle with a large number of police personnel combing the scene. Shortly afterwards, the Islamabad Police declared a “red alert” in the city.

According to Deputy Inspector General of Police Sohail Zafar Chattha, the police spotted a “suspicious vehicle” with a man and a woman aboard at 10:15am in the area.

“When the police stopped the vehicle, the couple came out of the car. The long-haired man, while being checked by the officers, went inside the vehicle on some pretext and then detonated himself,” he said in a media briefing at the crime scene alongside Islamabad Deputy Commissioner Irfan Nawaz Memon.

Chattha said a police officer of the Eagle Squad was martyred in the blast while four others officers were injured. He lauded the police for “saving Islamabad from a major foul play”.

Meanwhile, the joint executive director of the Pakistan Institute of Medical Sciences (Pims), Dr Iqbal Durrani, told that two bodies and five injured policemen had been brought to the hospital.

Separately, in an interview with Geo News, Interior Minister Rana Sanaullah confirmed that “two terrorists” were killed in the blast.

“The vehicle used in the blast was registered in Chakwal. The car entered Islamabad from Rawalpindi […] it was packed with explosives and headed for a high-value target in the capital,” he said.

Sanaullah added that had the car reached its target, it would have caused heavy losses.

The outlawed Tehreek-e-Taliban Pakistan (TTP) has claimed responsibility for the attack in a statement released on Friday.

Earlier in a tweet, the Islamabad police identified the slain officer as Head Constable Adeel Hussain. It said that terrorists had been targeting police for some time to demoralise law enforcement personnel.In another tweet, the police said that diversions had been placed for both sides of traffic at Service Road East of Sector I-10/4. It advised citizens to use Service Road West of Sector I-10/4 as an alternate and stay away from the blast site.