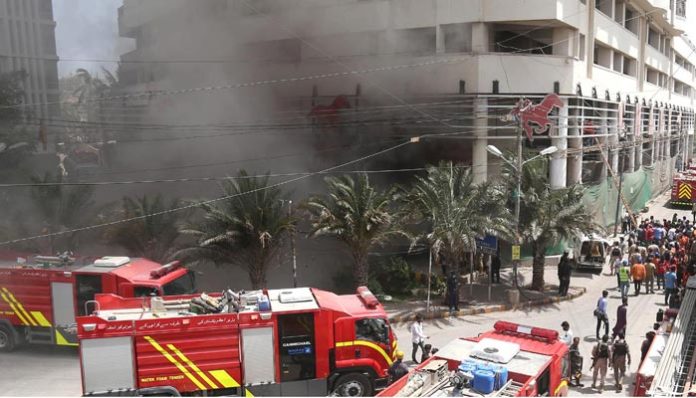 A huge fire that erupted in a superstore’s basement in a multi-storey building located near Jail Chowrangi earlier this week has still not been completely extinguished despite hectic efforts lasting for more than 72 hours (three days) and spending over 1.2 million gallons of water, Geo News reported Saturday.

The blaze that had broken out at the warehouse of the department store in the basement of the multi-storey building has left scores of families living in the residential building displaced.

On Thursday, the fire brigade had claimed that they had controlled the blaze and only a few burning patches remained to be doused, which would be achieved in a short time. However, that claim proved to be false as the fire was still not completely extinguished with flames continuing to erupt at multiple places in the extremely hot building.

Meanwhile, the fire brigade department warned that the cooling process would take at least two more days. As smoke and flames could be seen emanating from the basement, and ground and mezzanine floors of the building as well as its parking area, over a dozen fire tenders, remained busy in the extinguishing work throughout Friday, throwing water inside the building from different directions, breaking the walls and digging the footpath.

They also used foam and fire extinguisher balls to put out the flames. Whereas the fire brigade claimed that the intensity of the fire had been controlled, it also expressed the fear that the situation would turn grave in case the blaze engulfed the first floor.

“We have controlled the intensity of the fire and now the cooling process is under way, which may take at least two more days,” said Chief Fire Officer Mobin Ahmed. “Flames are erupting and will continue to erupt until the affected area is cleared completely.”

The use of excessive water posed another problem for the authorities. Ahmed said that as the fire brigade has been using water for three days to extinguish the fire, the water level has reached around five to six feet in the basement, creating difficulties for the firefighters in their operations.

The chief fire officer added that the building’s foundation had already been damaged due to the fire and now the presence of huge amount of water in the basement could further damage the building. He explained that suction pumps were being used to pull out water from the basement, due to which Kashmir Road and its surroundings had been inundated.

Although a case was registered against the owners of the department store, the police are yet to arrest any of the suspects nominated in the FIR.

“No arrest has been made so far,” confirmed Investigations SSP Altaf Hussain. He added that the nominated suspects were trying to obtain protective bail.

In response to a question, he clarified that the case was registered on the request of the Sindh Building Control Authority.

“Actually, it was the prime responsibility of the SBCA to inspect the building and ensure the implementation of the laws,” the officer remarked. “Officials of the SBCA and other relevant authorities will also be in the radar of the police during the investigations.”

The blaze erupted at around 11:00am in the warehouse of the departmental store at the multi-storey building near Jail Chowrangi on Wednesday.

The management of the store tried to extinguish the fire with the available fire extinguishers and then called the fire brigade. Within minutes, smoke surrounded the entire building creating panic among the residents who rushed out. Many people living on upper floors were trapped and had to be evacuated with the help of ladders.