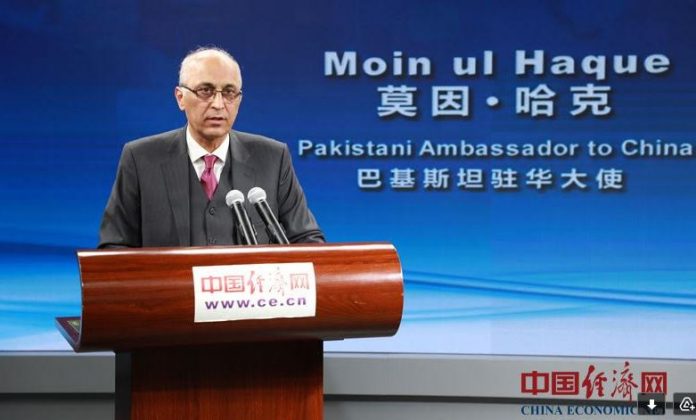 Addressing a webinar organized by China Economic Net, he said Pakistan is a leading country in the production of wheat, cotton, rice, sugar cane, lentils，mangoes and milk. Pakistan is the fourth-largest producer of milk and has a vibrant livestock sector, leading in meat and poultry production.

The ambassador said that agriculture contributes more than 80 percent to Pakistan’s GDP and provides more than 30 percent of the national labor force.

He further said the agricultural cooperation was extensively discussed in an important bilateral meeting held between two foreign ministers in Hainan in August, 2020.

“The production of quality seeds, the productivity of various crops strengthening an agro-based industry to bring in value addition, manufacturing pesticides, and setting up gold chain networks were discussed.

We also discussed the capacity building of our scientists and students, sharing and transfer of agricultural technology and establishment of research institutes,” he said.

Ambassador said that recently China has adopted its 14th five-year plan for 2021to2025 in which the field of modern agriculture has given high value.

“I believe that Pakistan can make optimum use of China’s past achievements and its future agricultural development schemes to address our weakness and consolidate our strength in the agriculture sector,” Moin said.

The ambassador expressed gratitude to the Chinese government and relevant institutions for giving Pakistan supports during the locust plague.

The Chinese government sent a delegation of experts, provided specialized drones to fight the locust swarm and helped to set up a set of pest and disease control center in Karachi.

China’s unprecedented success in combating poverty and bringing more than 800 million people out of poverty is indeed a miracle of recent times, helping communities to improve livelihood by developing their local agricultural products.

“I would like to convey my sincere gratitude to China Economic Net and leadership that is present here. Thank you for all your valuable support in strengthening economic and commercial relations between China and Pakistan, from sponsoring mangoes festival, organizing various conferences and seminars to recently hosting the Pakistani government Pavilion in Shanghai,” the ambassador stated.

“I hope that two embassies and two governments can work together to have some concrete results and achievements in the field of agriculture as next year we are going to celebrate the 70th years of diplomatic relation, a very important milestone in our relationship,” he added.