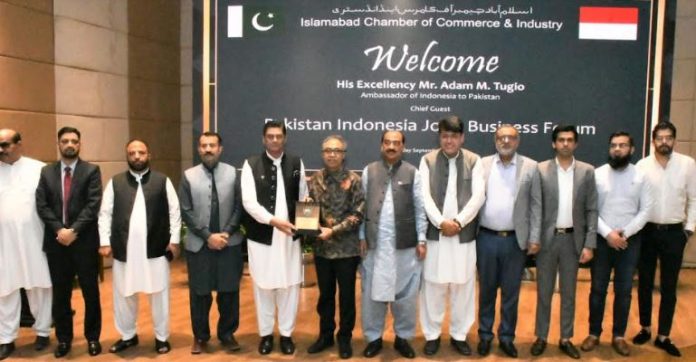 Speaking at the occasion, Adam M. Tugio, Ambassador of Indonesia that his country was a gateway for the USD 2.9 trillion economy of ASEAN region and Pakistan should tap it for trade and exports by developing close cooperation with Indonesia. He said that China was enjoying a bilateral trade of around USD 600 billion with ASEAN, but Pakistan-ASEAN bilateral trade was less than 1%, which should be increased to achieve better results. He stressed for promoting cooperation among women entrepreneurs of Pakistan, Indonesia and ASEAN region that would give a boost to trade among these countries. He said that his embassy was planning to organize a dialogue on economy involving B2B and G2G meetings between the two countries besides holding an exhibition of the products of both countries to highlight their potential for bilateral trade.

Speaking at the occasion, Muhammad Shakeel Munir, President, Islamabad Chamber of Commerce & Industry said that the Pak-Indonesia combined population was a huge market of around 500 million people, but their bilateral trade of around USD 4 billion was not matching with their actual potential. He stressed for diversification of trade to increase its volume. He stressed that both countries should finalize a free trade agreement to reduce trade barriers and boost the volume of two-way trade. He underscored the need of regular exchange of trade delegations to explore all untapped areas of mutual cooperation between the two countries.

Shehzad Cheema, Joint Secretary, Ministry of Housing & Works said that Pakistan was facing a shortage of 7.7 million housing units and Indonesian investors have great potential to invest in Pakistan’s housing sector. He said that his ministry was planning to organize an international expo on housing to attract local and foreign investors.

Jamshaid Akhtar Sheikh Senior Vice President and Muhammad Faheem Khan Vice President ICCI also spoke at the occasion and said that the geographic locations of Pakistan and Indonesia offered enormous potential for promoting bilateral and regional trade that should be exploited for achieving beneficial outcomes.