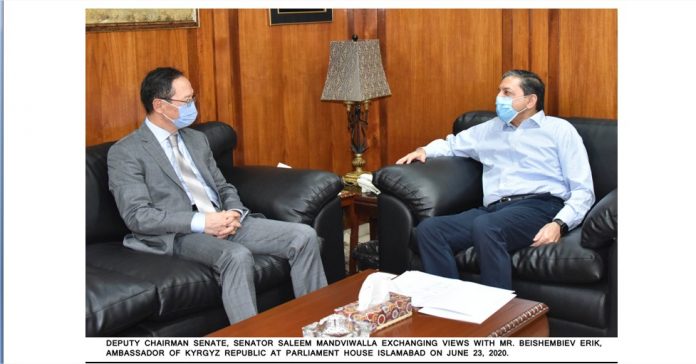 ISLAMABAD, JUNE 23 –  Deputy Chairman Senate Saleem Mandviwalla has said that Pakistan and Kyrgyz have good relations at parliamentary level and also enjoy cordial bilateral ties, however, economic cooperation needs to be further enhanced for mutual benefit of both the countries.  He expressed these view while talking to Ambassador of Kyrgyz Erik Beishembiev, here at Parliament House on Tuesday.

Mandviwalla said that Pakistan and Kyrgyz have shared common ideological and political stances on major international issues and the cooperation between the two sides at parliamentary forums is remarkable.  He said that both the countries has historical relations which can be traced back centuries ago as both the nations have long time and close cultural and spiritual ties.  The mutual exchange of the visits of the senior leadership of both the countries have also strengthened bilateral relations, however, there is huge potential for trade and economic cooperation.  He said that the existing excellent political relations should be transform into growing trade and economic relations.  He said both the countries are rich in mineral resources, have high skilled human resources, excellent opportunities for developing industry and agriculture, attracting foreign investments for joint production and supply of goods, including those for export.

Deputy Chairman Senate extended invitation to Speakers of Supreme Council of Republic of Kyrgyz to visit Pakistan and called for more frequent exchange of Parliamentary and trade delegations.  He also urged that there is a need for better connectivity between the two countries and option for direct flights needs to be explored.

The Ambassador of Kyrgyz agreed with the views of the Deputy Chairman Senate and called for better parliamentary linkages and people to people contact for promoting social and economic ties for mutual benefit of both the countries. He suggested the idea of organizing caravan of friendship comprising of businessmen, tourists and media persons to travel from Pakistan to Kyrgyz to boost mutual ties.