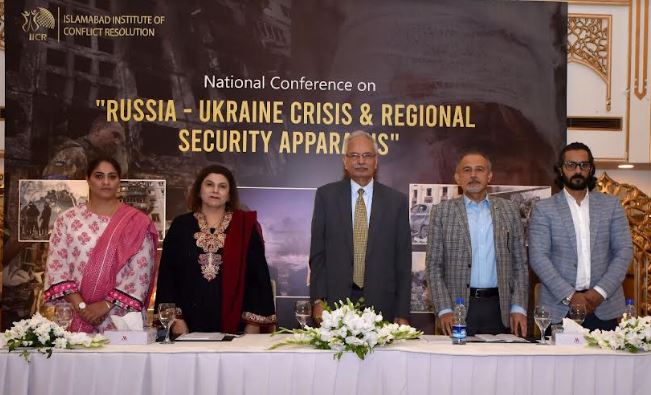 ISLAMABAD, Experts at the National Conference on “Russia-Ukraine Crisis and Regional Security Apparatus” on Monday said Pakistan should have relations of solidarity and cordiality with both Ukraine and Russia despite the ongoing conflict to ensure neutrality during the ongoing war.

The national conference was organised by Islamabad Institute of Conflict Resolution (IICR) where the Founder and Executive Director IICR Sabah Hassan moderated the session.

Senior Defence Analyst and Political Scientist, Dr Rifaat Hussain said Ukraine was a large country in the middle of eastern Europe with a history of its borders changing hands several times whenever it were contested. However, the country had developed it’s independent culture, national posture and identity over the time.

He added that the conflict between Ukraine and Russia occurred mainly due to the reason that the Russians were apprehensive to the European extension of the North Atlantic Treaty Organization (NATO).

Dr Hussain mentioned that meanwhile Russia and China after the peaceful rise of the latter in the first decade of 21st century had unanimously agreed to promote multilateralism and non-hegemonic world order.

“The Chinese believe that they are ready to support Russians and Ukraine in multipolar world order.” The Chinese, he said had not provided any military support to Russians to carry out it’s war and could not commit themselves in an unqualified way. However, China was pursuing the policy on Ukraine that served its own purpose.

The Defence Analyst believed that Beijing could not undermine the importance of Moscow and both were working together to make a non-hegemonic world order to promote multipolar world order. “The Chinese are blaming US and larger western world as the center of disturbance and not Russia in the ongoing conflict.”

Head of Department of Humanities and Social Sciences, Bahria University, Prof Dr Azhar Ahmad said the Ukraine-Russia War was not the first and only conflict in the world.           However, the geopolitical and economic size of the conflict was very large and perhaps was the proxy war of West against Russia.

“It will play an important role in global transition of power from the west to east. According to the UN, the Ukraine-Russia War had resulted into massive loss of human lives. The trade in food and energy sectors are facing the most impact of this war.

“Ukraine and Russia are key suppliers of many raw materials and disruption in these supplies will cause many issues.”

“The inflation is soaring in Russia and it’s economy might shrink to 15% and rely more on China in future to ensure economic supply chains.”

He mentioned that Pakistan had developed moderate economic relations with Ukraine.               “The war also resulted in increased prices of LNG and there will be more power outages ahead as Pakistan’s fossil fuels purchases have come to a halt. Pakistan was importing steel from Ukraine that was halted and had impacted the country’s construction sector.”

The Ukraine crisis posed many challenges but it provided an opportunity to Pakistan to realign it’s geopolitical goals and strategies as the conflict in the long run might lead to the reversal of globalisation casting huge impacts on countries like Pakistan.

Chairperson Quaid-i-Azam University (QAU) Department of Defence and Strategic Studies (DSS), Dr Shabana Fayyaz said power politics was the game of global political politics where the Ukraine-Russia war was nothing new rather a continuity of history.

She underlined that in case of reversal of globalisation, the global south and countries like Pakistan would be the victims.

“The conflicts have deep impacts on the masses as people suffer the most during conflicts and human security needs to be considered in conflicts.”

Referring to the African prover, she said, “when two elephants fight the one that suffers most is the grass and in Ukraine and Russia conflict people are the most impacted”.

Dr Fayyaz added that the Russians had conceived the larger NATO expansion post-Cold war as a threat to its existence whereas the US was adding more fuel to the conflict of Ukraine.

“Ukraine has the largest border and supply chains with Russia and the conflict is happening in the core region of the world that might transform the European Security Order and potentially may lead to a third world war (WWIII).”

The DSS expert claimed that the western responses were merely restricted to economic sanctions, economic and military assistance to Ukraine, diplomatic isolation of Russia, and enhanced NATO movement in the region along Ukraine.

International Law Expert, Nasir Qadri said that the NATO was initially against Russia and at the moment the vision was the same. Before Ukraine Crisis, there were NATO expansion programme in Ukraine underway that led to the invasion which was also forewarned by Russian President Putin after mobilisation of his troops to Ukrainian borders prior to intervention into Ukraine.

Dr Rifat Hussain delivered the vote of thanks and said despite the western media’s propaganda President Putin would hold is influence in the region as neither Putin nor Russian forces will back off. However, the conflict would remain but Pakistan should have relations of solidarity and cordiality with both Ukraine and Russia.