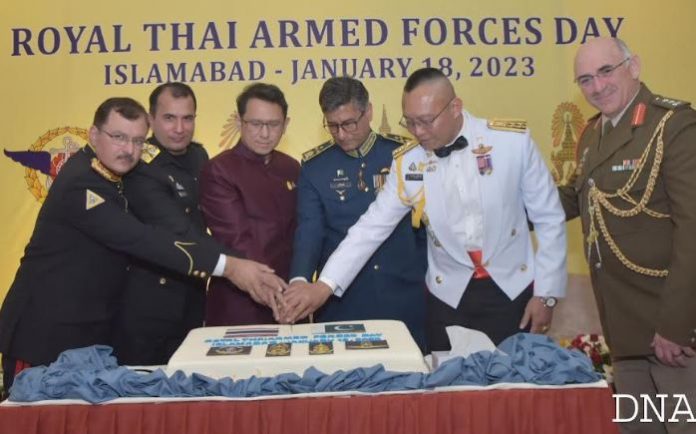 ISLAMABAD: Air Marshal Irfan Ahmed, Deputy Chief of the Air Staff has said Thailand and its armed forces have always defended their homeland against any misadventure. He said importance of independence of any nation can never be over-emphasized.

“I must mention here that independence can never be preserved without strong armed forces. The Royal Thai Armed Forces Day therefore is an important annual event’, he added.

Air Marshal Irfan made these remarks while speaking on the occasion of the Armed Forces Day of Thailand. Ambassador of Thailand Chakkrid Krachaiwon and the Defence Attache Col. Thanai Permpul also spoke on the occasion. A large number of guests hailing from various walks of life and the defnece attaches of various countries attended the event.

Air Marshal Irfan further said, he was extremely glad to be part of the Thai Armed Forces Day. He also thanked the Ambassador and the Thai Defence Attache for inviting him as the Chief Guest.

He said Pakistan and Thailand have an enduring friendship for the last 71 years. The historical state of Takht Bahai in Mardan and Buddhist remains in Texlia carry huge sentimental value for the Thai people and Pakistan always welcomes the Thai people with open arms.

Talking about the security challenges he said our two countries face significant security challenges. Pakistan and its armed forces have a rich history of combat readiness and dealing with armed conflicts and insurgencies.  Both countries can benefit from each other’s experiences especially in the internal security field.

Ambassador of Thailand Chakkrid Krachaiwon in his speech said both countries enjoy cordial relations. He said Thailand recently celebrated anniversary of our diplomatic relations. He said Pakistan is a key player in the South Asian region and has an important role to play in terms of peace and security in the region.

He said both countries have a long role in the peacekeeping activities as well adding Pakistan hosts a large community of military and defnece attaches.

Col. Thanai Permpul, the Defence Attache in his remarks thanked the guests for gracing the occasion with their presence. He added, Pakistan and Thailand enjoy excellent relations since long. Both countries have cooperated with each other on various regional as well as international forums.