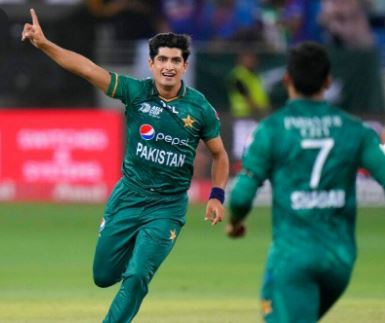 SHARJAH: Pakistan on Wednesday defeated Afghanistan by just one wicket in a tense match, which saw green shirts make their way into Asia Cup final. Naseem Shah hit 2 consecutive sixes in last over to hand Pakistan the win.

Afghanistan had set a 130-run target for Pakistan in their 20 overs after being asked to bat first by Babar Azam.

Pakistan had won the toss and decided to bowl first, eyeing to keep their winning streak intact against Afghanistan as the two teams face each other in the Asia Cup Super 4s match at the Sharjah Cricket Stadium.

Afghanistan were off to a flying start and looked set to set a big score once their openers started to hit the ball over the park.

However, Haris Rauf dismissed the explosive Rahmanullah Gurbaz in the fourth over and Mohammad Hasnain removed Hazratullah Zazai to bring two new batsmen to the crease.

Once the openers were dismissed, Babar brought in Mohammad Nawaz and Shadab Khan who put pressure on Afghanistan with their tight bowling.

The pressure eventually got to Karim Janat and Ibrahim Zadran who were struggling to middle the ball. In the 12th over, Nawaz dismissed Janat to put Afghanistan three down.

From then on, regular dismissals by the bowlers and tight bowling by the Men in Green put Afghanistan in check.

It was only two boundaries by Rashid Khan in the last over that pushed Afghanistan to 129-6 and helped them set a 130-run target for Pakistan.

For the Men in Green, Haris ended up with two wickets while Nawaz, Shadab, Hasnain, and Naseem took one wicket each.

For Afghanistan, Ibrahim Zadran was their highest run scorer who ended up with 35 runs off 37 balls.