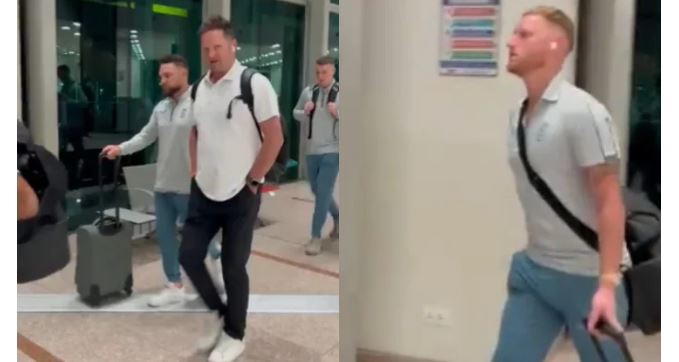 England Cricket shared a video of the team’s arrival at the Islamabad International Airport, from Abu Dhabi where the English men played practice matches. The team was shifted to a hotel in the federal capital under strict security arrangements. The British High Commissioner in Islamabad will host a dinner in the English team’s honour. The event will be attended by different Pakistani officials.

The home series is slated to begin on December 1, with the first Test to be played at the Rawalpindi Cricket Stadium. It will be a Test match to be played for the first time in the Pindi stadium’s history. Later, the second Test will be hosted in Multan while the last Test will be played in Karachi.

Meanwhile, Pakistan team — who have been practicing for days — will rest today. The two sides will start training again at the Rawalpindi stadium from tomorrow till Wednesday (November 28-30).

England skipper Ben Stokes, who led his side to the glorious victory of T20 World Cup 2022 against the Men in Green, will be captaining the team in the Test series, the first in 17 years to be played in Pakistan. The England Test squad toured Pakistan in 2005.

The English men visited Pakistan after a hiatus of the same duration, to play a seven-match T20 series in September, and won 4-3.