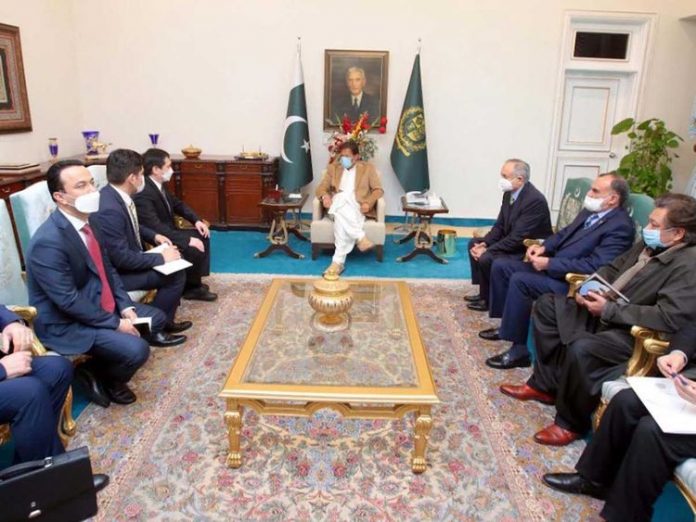 Tashkent: The Afghan acting foreign minister, Mohammed Haneef Atmar, on Tuesday took part in a trilateral meeting with high level officials from Uzbekistan and Pakistan to discuss ways to strengthen cooperation in the economy, trade, security and transportation, the Afghan Foreign Ministry said.

Uzbek Deputy Prime Minister and Minister of Investment and Foreign Trade of Uzbekistan Sardor Umurzakov plays host to the meeting in Tashkent.

During the meeting, the sides signed a roadmap for the construction of Mazar-i-Sharif-Kabul-Peshawar railway project that is expected to significantly increase the transit potential of Central Asia. The railway technical project is expected to be completed by May. When operational, the railway will significantly reduce the time and cost of transporting goods between South Asia and Europe through Central Asia.

Besides this, the Uzbek side expressed its full support to the ongoing intra-Afghan peace process in Doha.

Umurzakov noted that peace and stability in Afghanistan are key factors for development, economic growth, and increased cooperation at the regional level. He noted that Tashkent is ready to invest in Afghanistan’s infrastructure and support comprehensive regional connectivity.

In December 2018, the Uzbekistan Railway said that the Uzbek, Russian, Kazakh, Afghan and Pakistani railway companies would create a financial consortium for the construction of the new railroad. The transport corridor is expected to link the European Union, Russia, Uzbekistan, Afghanistan, Pakistan, India and the Southeast Asian countries.

Earlier Uzbekistan and Pakistan on Monday showed resolve to enter into a preferential trade agreement and cooperate in shipping, textile, engineering and information technology sectors.

Shavkat Mirziyoyev, president of Uzbekistan discussed matters related to economic cooperation during a meeting with Adviser on Commerce and Investment Razak Dawood, who is leading a delegation to Uzbekistan, according to an official statement. This was the first meeting of joint working group on trade and economic affairs and the meeting of tripartite working group on the implementation of the ‘Trans-Afghan railway project’. The meeting would continue till 4 February.

The delegation includes officials of ministry of commerce and other related ministries and departments. The visit is a follow-up to the visit of Uzbekistan Deputy Prime Minister Sardor Umurzakov in September last year.

The proposed 573km long railway link will be laid from Peshawar to Kabul and from Kabul to Uzbekistan via Mazar-e-Sharif. Estimated 27 stations, 912 artificial constructions and seven tunnels will be established to facilitate cargo movement. The railway link will be crucial to economic development of the three countries, Central Asian Republics and will help strengthening the regional ties.

During the meeting of the joint working group, both sides expressed their desire to enhance trade relations between the two countries. In this regard, the two sides discussed streamlining bilateral phytosanitary standards, enhancing Banking Cooperation, working on rail and road connectivity matters and establishment of off dock terminal.