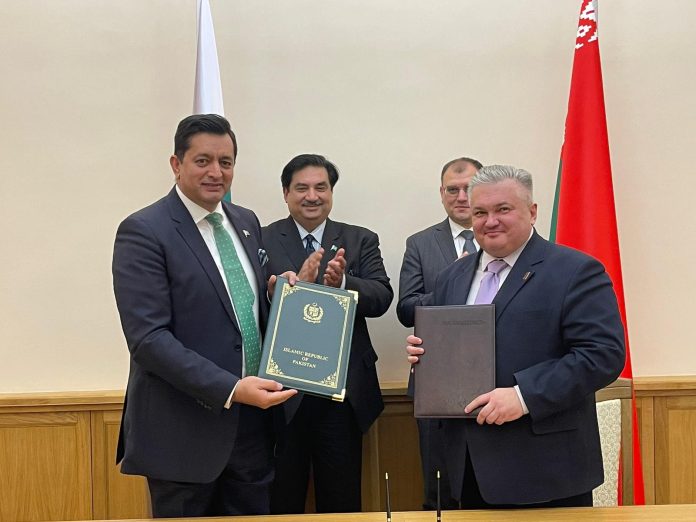 The Sixth Session of Pakistan-Belarus Joint Economic Commission (JEC) was held in Minsk, Republic of Belarus from 12-13 January 2023. The Pakistan delegation was headed by H.E. Engr. Khurram Dastgir Khan, Federal Minister for Power, while the Belarusian side was led by H.E. Mr. Viktor Mikhailovich Karankevich, Minister of Energy of Belarus.

H.E Mr. Viktor Mikhailovich Karankevich welcomed the Pakistani delegation and expressed his interest in furthering the bilateral relationship between the two countries, and diversifying economic and commercial relations between Pakistan and Belarus, as well as technical cooperation in various sectors on mutually beneficial basis.

Noting the progress made on goals set during the last session of Pakistan-Belarus JEC held in November 2017, both Sides reviewed the ongoing bilateral cooperation in trade, industry, agriculture, healthcare, pharmaceuticals, science & technology, education and culture. The two Sides agreed to take several measures for the enhancement of bilateral ties in various Sectors, including textiles, auto sector, agriculture equipment and mining.

The JEC was concluded with the signing of the Protocol of the Sixth Session of Pakistan-Belarus Joint Economic Commission by the two Ministers. The two Sides also signed two Memoranda of Understanding (MoU) on Cooperation in Tourism Promotion and cooperation between Lok Virsa Museum, Islamabad and National History Museum, Minsk.

Pakistan and Belarus share warm and long-standing political and economic relations. It may be recalled that Prime Minister of Pakistan H.E. Muhammad Shehbaz Sharif and President of the Republic of Belarus during their meetings held on the sidelines of SCO Summit and CICA Summit in September and October 2022, respectively, reiterated the need for furthering economic cooperation between the two countries.