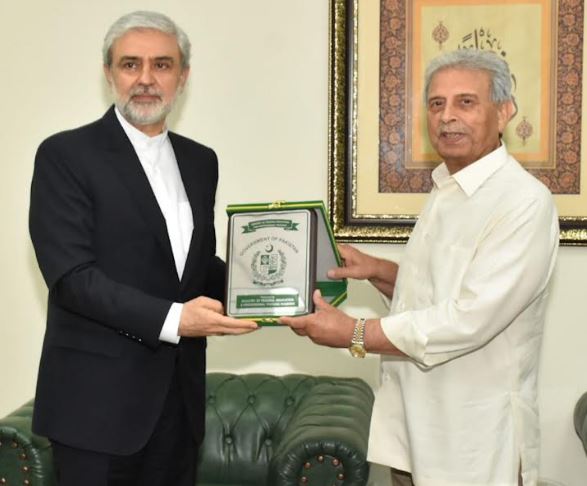 ISLAMABAD, JUL 6: Ambassador of the Islamic Republic of Iran to Pakistan Seyyed Mohammad Ali Hosseini called on the Federal Minister for Federal Education and Professional Training Rana Tanveer Hussain in his office. Senior officials of the ministry including Secretary Education Ms. Naheed S. Durrani also attended the meeting in addition representatives from HEC and NAVTTC.

Rana Tanveer welcomed the Iranian delegation and said that the two countries have cultural, linguistic and people to people love for each other. He said that Persian language is the mother of Urdu and has deep roots in Pakistan. Rana Tanveer discussed exchange of expertise and knowledge regarding Vocational and Technical Training. He said that the two countries can benefit from the experience of each other.

Rana Tanveer welcomed exchange of teachers and students to further mutual cooperation especially for Skilled Vocational Training. He said that there is significant potential in cooperation between the two countries. He said that Pakistan can learn from the expertise of Iran in Engineering, Nanotechnology and Aerospace technology. Minister said that Pakistan is willing to offer scholarships to Iranian students in order to enhance mutual collaboration.

Rana Tanveer Hussain said that the future is in Vocational Training of the population of Pakistan. He said that it provides the best opportunity to the people to find jobs. He said that Pakistan and Iran through NAVTTC should exchange teachers and students to learn from the expertise of each other.