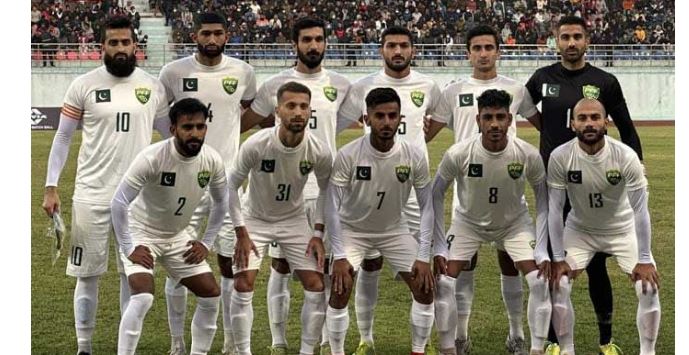 KARACHI: Former Pakistan football team captain Essa Khan said that the national side can qualify for the FIFA World Cup if the team is selected on merit.

Essa Khan, who scored 11 goals in 36 appearances for Pakistan, said that “Pakistani is capable to qualify for the mega event” if the principles of merit are upheld during the selection process.

“The World Cup will be increased to 48 teams from 2026 which gives Pakistan a good opportunity to qualify for the event. If Pakistan could not qualify for 2026 World Cup, I’m hopeful that they would make it in 2030 if merit is promoted and all the stakeholders are on the same page,” said the 38-year-old.

Essa was also unimpressed with the Pakistan Football Federation Normalisation Committee’s decision to play a friendly against Nepal, which the Shaheens lost 1-0.

“Playing a friendly match against Nepal was a waste of money,” he said. “Including diaspora players in the squad also damaged the confidence of local players.”

Anjan Bista scored the winner as Nepal beat Pakistan by 1-0 at the Dasharath Stadium in Kathmandu.

This was Pakistan men’s team’s first international match in more than three years.

Pakistan’s return to the international arena was possible after FIFA had decided to lift ban on the Pakistan Football Federation (PFF), which was imposed in April 2021 due to undue third-party interference, in June earlier this year.

FIFA also extended the mandate of the Normalisation Committee (NC) by 12 months.

According to FIFA, the mandate of the normalisation committee includes the managing of PFF’s daily affairs, ensuring the proper registration and scrutiny of the clubs in Pakistan, draft and ratify, with the assistance of FIFA and the AFC, an electoral code for the PFF, organise the elections at district followed by provincial levels and conduct the elections of a new PFF executive committee.