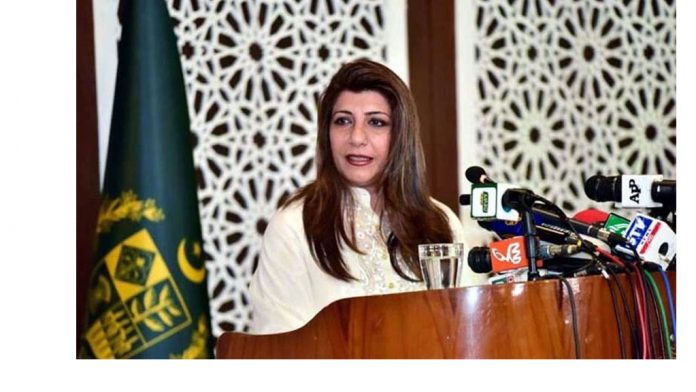 ISLAMABAD, JUNE 14 / DNA / = Pakistan strongly condemned and categorically rejected Indian Defence Minister’s remarks about the situation in IOJ&K and Azad Jammu and Kashmir (AJK) through a video address to “Jammu Jan Samvad rally” today. The statement is another manifestation of the BJP government’s delusions about AJK and incurable obsession with Pakistan.

It has been clear to the people of Indian Occupied Jammu and Kashmir, Pakistan, and the international community, from the outset, that the motive behind the RSS-inspired BJP government’s illegal and unilateral actions of 5 August 2019 was to inter alia bring about demographic changes in the IOJ&K so that the Muslim majority in the region could be changed by deceit, fraud and brute force. The subsequent steps of promulgation of new domicile law and amendments in various laws, especially regarding acquisition of properties in IOJ&K, clearly show that the primary motivation remains the disempowerment and disenfranchisement of the Kashmiri people and further usurpation of their rights.

The BJP government has been seeking to force itsdecisions upon the people of occupied Jammu and Kashmir through the muzzle of the gun by deploying more than 900,000 security forces in the region; a lockdown that continues for over 10 months; arbitrary detentions of thousands including political activists, civil society members, and common men, women and even disabled; snapping all means of communications; and imposing curfew-like strict measures restricting movement, assembly, peaceful political activities even religious congregations. Since August 2019, hundreds of innocent Kashmiris have been martyred in extrajudicial and custodial killings. The egregious human rights violations by the BJP government in IOJ&K and collective punishment of entire communities including destruction of homes and means of livelihood are well-documented by international human rights and humanitarian organisations.

The Indian Defence Minister’s statement is another desperate attempt to divert attention from India’s state-terrorism and unacceptable human rights violations in IOJ&K. It is also designed to ramp up flailing support for the BJP through unabashed political opportunism and reckless disregard for the peace, stability and security of the region.

The assertion about “international recognition” of the BJP government’s measures in IOJ&K can best be termed as “obdurate and wilful amnesia.” To assist the Indian Defence Minister’s memory, the international opprobrium over the BJP government’s human rights violations in IOJ&K has been unequivocal, including inter alia three UNSC consultations for the first time in about five decades, U.S. Congressional hearings, discussions in Parliaments around the world especially the EU, condemnation by international human rights and humanitarian organisations, scores of Parliamentarians, hundreds of editorials and op-eds in reputed international newspapers and magazines, and offers of mediation by different world leaders.

While the world is pre-occupied with the Covid-19 pandemic, Indian forces have intensified fake “encounters” and “cordon-and-search” operations and increased their repressive actions, including extra-judicial killings of Kashmiri youth. Even the remains of the martyred Kashmiris are not returned to families for funerals. There is stringent censorship of local media and suppression of dissenting voices by excessive use of force in place. All Hurriyat leaders remain under incarceration.

Rather than entertain any further delusions about AJK, the Indian Government must immediately remove all restrictions in IOJ&K, restore all means of communications including 4G internet, withdraw occupation forces from the region, remove draconian PSA, AFSPA and UAPA laws, and allow unfettered access to international observers and independent media to the occupied territory.

For its part, Pakistan will continue raising the plight of the innocent Kashmiris and support their inalienable right to self-determination as enshrined in the UN Security Council resolutions through a free, fair and impartial plebiscite under the auspices of the United Nations.