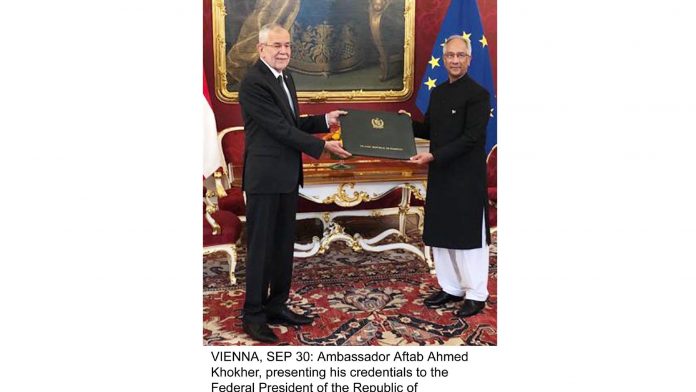 VIENNA, SEP 30 (DNA) – Ambassador Aftab Ahmed Khokher, presented his credentials to the Federal President of the Republic of Austria, Dr Alexander Van der Bellen, during an official ceremony held at the Hofburg Palace in Vienna Wednesday.

He pledged to further strengthen and expand the bilateral relations between Pakistan and Austria, a press release issued by the Ministry of Foreign Affairs here said.

President Van der Bellen noted that there was immense potential for cooperation between the two countries, particularly in the field of renewable energy, green economy and higher education.

Ambassador Khokher, whose last assignment at the Ministry of Foreign Affairs in Islamabad was Additional Secretary (Americas) has previously served as Pakistan’s ambassador to Lebanon.

He has also served at Pakistan’s Permanent Mission to the United Nations in Geneva and as Pakistan’s Consul General in Jeddah, Saudi Arabia.

Ambassador Khokher will also be Pakistan’s Permanent Representative to the Vienna-based international organizations which include the International Atomic Energy Agency, UN Industrial Development Organization, UN Office on Drugs and Crime and the UN Commission on International Trade Law. =DNA