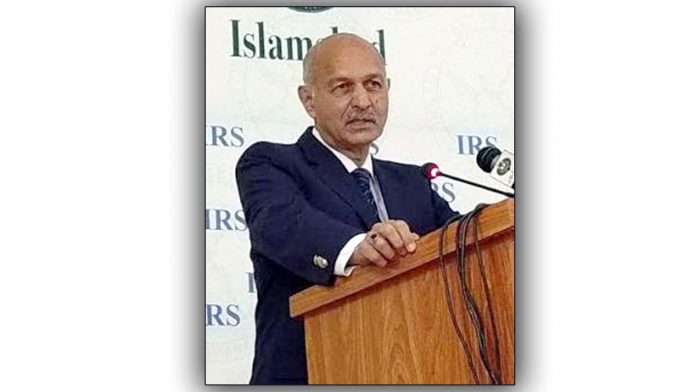 ISLAMABAD, FEB 23 – Chairman of Senate Foreign Affairs Committee, Senator Mushahid Hussain, has said India has a clear Pakistan policy, in which disinformation and destabilisation are key components, while Pakistan needs clarity in its India policy to respond effectively.

He made these remarks at a Conference on ‘Disinformation as a Tool of Strategic Warfare’ organised by the Institute of Regional Studies.

Senator Mushahid Hussain chaired the panel on “India’s Disinformation Campaign against Pakistan and its Impact”. He referred to American scholar Dr Noam Chomsky’s landmark study on propaganda, ‘Manufacturing Consent’, where he talks of a nexus between Media Ownership, Advertisers and Media Elites, which act in concert to demonise the ‘enemy’. Senator Mushahid Hussain said that the Indian approach to disinformation is an example of this model, referring also to the tapes of Indian journalist Arnab Goswami and distortions by Indian media of the Senator’s own statement on Pulwama.

Senator Mushahid Hussain said it was a myth that propaganda was a prerogative of only dictatorships, in fact, democracies like India, Israel and US, too engaged in disinformation and India’s propaganda against Pakistan is unique for three reasons.

First, it is the only example of a neighbour to wage such systematic information warfare against a neighbour in peacetime, belying claims it wants good neighbourly ties. Second, it predates Modi, as this campaign started in 2005.

Third, it was the ‘largest network ever exposed’ of falsehood, lies and disinformation, spread over 750 fake sites, over 10 UN-accredited NGOs, a number of think tanks, using an Indian news agency, ANI, to disseminate disinformation. The scale and sustained nature of of such disinformation is staggering and unprecedented, said the Senator.

And the purpose of this multi-million dollar effort was one: ‘to discredit Pakistan internationally’, as the EU DisinfoLab rightly put it.

Senator Mushahid Hussain also quoted from a recent tweet of Indian defence analyst, Pravin Sawhney, who linked India military’s  withdrawal from the Line of Actual Control with China, to Indian government’s desire ‘to go back to its chosen enemy -Pakistan’ as ‘China was distracting the extremists from their core mission’.

Given this context, Senator Mushahid Hussain proposed the immediate establishment of a Joint Cyber Inter-Services Command to play a pivotal role in the emerging threat of an undeclared hybrid war by India against Pakistan.

He said, for Pakistan, ‘truth is the best weapon’ against India, adding that The Economist had a cover story on ‘Intolerant India’, while The New York Times carried Indian writer Arundhati Roy’s article in which she rightly said ‘RSS is the State in today’s India’ and ‘an architecture of fascism is being erected in India’. These themes reflect the reality of Modi’s India.

There was an animated discussion, including questions and comments, and Senator Mushahid Hussain thanked IRS President, Ambassador Nadeem Riyaz, for reviving the IRS as the preeminent Pakistani think tank on India and South Asia.