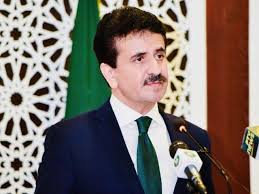 ISLAMABAD : The Foreign Office said on Thursday that recognition of Israel is not under consideration.

Addressing a weekly news briefing in Islamabad, spokesperson Zahid Hafeez Chaudhri reiterated that there is no change in Pakistan’s principled position on the issue. He said Prime Minister Imran Khan has made it clear that unless a just settlement of the Palestine issue, satisfactory to the Palestinian people, is found, Pakistan cannot recognise Israel.Referring to the dossier Pakistan has recently presented on India’s sponsorship of terrorism, he called upon the UN counter-terrorism bodies to proceed on the basis of evidence provided by Pakistan and urge India to renounce use of terrorism as an instrument of state policy.

The spokesperson said the world bodies should also urge India to dismantle the infrastructure of terrorism it has established to inflict terrorism on Pakistan, and stop the use of other countries’ soil for its terrorist activities directed against Pakistan.