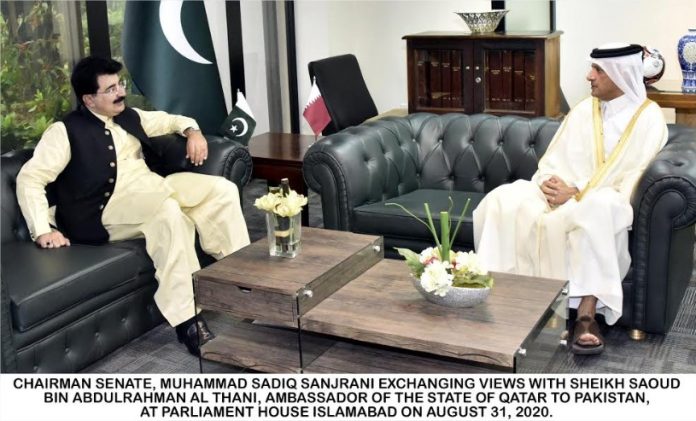 ISLAMABAD, AUG 31 (DNA) – Chairman Senate Sadiq Sanjrani has said that Pakistan and Qatar enjoy cordial relations and both sides have stood together in testing times.

Chairman Senate expressed these views  during a meeting with the Ambassador of Qatar Sheikh Saoud bin Abdulrahman bin Faisal Al-Thani, here at Parliament House on Monday.

Sadiq Sanjrani said that with improved security situation, investment opportunities have increased manifold in Pakistan especially in Gwadar region and the projects included in the CPEC.

He said that an increase in the parliamentary relations and exchange of delegations would be instrumental to explore the opportunities for economic cooperation and would pave the way for enhanced bilateral trade between Pakistan and other countries.

Chairman Senate also informed the Ambassador of Qatar about the human rights violations being committed by Indian forces in illegally occupied Kashmir.

Speaking to the Ambassador of Qatar, Chairman Senate Sadiq Sanjrani said that there is good opportunity for Qatar to invest in infrastructure related projects in Gwadar.  He said that CPEC Projects also offers many investment opportunities and Pakistani government would facilitate the investors from Qatar.

Chairman Senate said that there is need to further boost the parliamentary linkages between the two countries He said that exchange of business delegations would be beneficial to boost the existing trade as the existing economic cooperation is not in accordance with the potential available to enhance bilateral trade.

He said that there is enormous potential for investors in energy, infrastructure development and mining besides other sectors in Balochistan.

Chairman Senate observed that Pakistan wants to see the region prosper economically.  He said that peace and development are our priorities and Pakistan remains committed to promote ideals of peace for achieving sustainable development.

Regarding pandemic, Chairman Senate observed that nations have suffered across the globe.  He said that the emerging scenario needs holistic approach to cope with challenges posed to the world.  He called for making joint efforts to overcome the pandemic.  He said that developing region has suffered the most due to fragile health sector and scarce resources.

Ambassador of Qatar thanked Senate Chairman for the warm welcome at Parliament.  He said that Qatar places its relationship with Pakistan at high esteem and desires to further expand mutual cooperation in diverse sectors. DNA