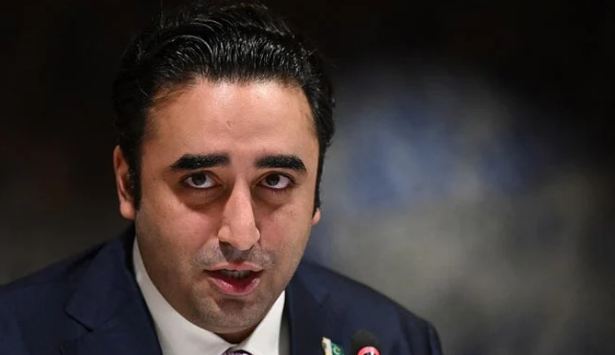 WASHINGTON: Accusing former prime minister Imran Khan’s government of following a policy of appeasement towards the Tehreek-e-Taliban Pakistan (TTP), Foreign Minister Bilawal Bhutto Zardari has said that the new leadership — both political and military — have ruled out talks with terrorist organisations that don’t respect the country’s laws and constitution.

“I am confident that if we can work with the Afghan interim government, which has influence over these groups, we will be successful in maintaining our security,” he said in a wide-ranging interview with The Washington Post in Davos, Switzerland, where he is attending the World Economic Forum.

The foreign minister accused PTI chief Imran Khan of giving TTP a place to hide. He said that Khan not only released the TTP prisoners in Pakistan’s custody but also engaged in dialogue with them.

“He [Khan] has always been ideologically sympathetic to their point of view,” the foreign minister added.

In response to a question about whether Pakistan had hoped that the new Afghan government would act against the TTP, FM Bilawal said: “Our hope — and in fact, their agreement — was that their soil would not be used for terrorism. We do hope to cooperate with them to deal with terrorists that are a concern to us.”

Echoing the sentiments of his recent condemnation of the attack on Kabul’s foreign ministry, he reiterated that both Pakistan and Afghanistan were victims of terrorism. The FM stressed that the two governments would have to work together to counter terrorism.

During the interview, Bilawal also touched upon the topic of his mother’s assassination and said that if former prime minister Benazir Bhutto, who was assassinated in 2007, had lived, both Pakistan and the entire region would have been a completely different place.

He told the publication that the Pakistan Peoples Party (PPP) had always aimed for Pakistan to be a democratic country, which he termed as the “only way” to deal with extremism and terrorism rampant in the country.

Also asked whether he could become prime minister this year, FM Bilawal said that he would have to win an election first.

“Obviously,” he added, “my party will be hoping that we win. The PPP has its own manifesto, and given the challenges that Pakistan faces, I believe that our manifesto speaks best to the country’s key problems, such as inflation and unemployment.

“However, I don’t believe that any one party will be able to solve all of Pakistan’s problems. If [our party wins the most votes], I will seek to form a government as prime minister and be willing to work in tandem with the other parties.”

Here are complete excerpts of the interview as published in The Washington Post:

QUESTION: Are you worried that Washington is disengaging from the region?

ANSWER: It is true that President (Joe) Biden never spoke with the previous prime minister, Imran Khan. We are hoping to go forward with more US engagement with our prime minister, Shehbaz Sharif.

Q: Didn’t President Biden make a bit of a mess of the US withdrawal from Afghanistan?

A: I believe that whatever the situation is in Afghanistan, it is a reality that we all have to deal with. We need to engage aggressively with the interim government in Afghanistan.

Q: Doesn’t the terrorist group Lashkar-e-Taiba have bases all over Pakistan and Afghanistan? And don’t they get support from your intelligence service, the ISI?

A: There is a whole alphabet soup of terrorist groups. Pakistan and America’s interests vis-à-vis such terrorist groups are aligned. America has withdrawn from Afghanistan. Now we have to focus on the reality, which is that everyone in the region and around the world is concerned about the potential use of Afghan soil for terrorist activities.

Q: Terrorism is having a resurgence in your country. The Pakistani Taliban — the Teheeik-e-Taliban Pakistan — has made terrible threats against you and your prime minister recently.

A: You’re right, I have been threatened by name by the TTP. I get threats all the time. … Unfortunately, this is the reality of the world that we live in. There is clarity among the top military and political leadership in Pakistan, and I am confident that we will be able to overcome these challenges.

Q: How grave a danger is posed by the TTP?

A: They were involved in the most heinous terrorist attacks in my country, including the assassination of my mother, Benazir Bhutto, in 2007, the attack on Malala Yousafzai in 2012, and the terrorist attack on a school in Peshawar in 2014.

They carried out a whole host of terrorist attacks. Pakistan has been proud of the fact that we were successful in taking on these terrorists in our territory, the TTP and others, and we managed to break the backbone of these groups. Unfortunately, the government that preceded ours conducted a policy of appeasement toward the Pakistani Taliban.

A: Yes, he gave them a place to hide. Not only did he release TTP prisoners who were in Pakistan’s custody, but Mr. Khan engaged in a dialogue with these forces. He has always been ideologically sympathetic to their point of view.

But the new leadership in Pakistan — both political and military — have been absolutely clear. There will entertain no talks with terrorist organisations that don’t respect our laws and constitution. I am confident that if we can work with the Afghan interim government, which has influence over these groups, we will be successful in maintaining our security.

Q: Did Pakistan hope that the new Afghan government would act against the TTP once they came to power?

Q: Pakistan-India relations are at an all-time low, right? You have called Prime Minister Narendra Modi “the butcher of Gujarat.” You were referring to his term as chief minister in that state during anti-Muslim riots in 2002.

A: Those remarks were in the context of the fact that the Indian foreign minister made some remarks about my country that was inaccurate. In my response, I reminded them about the Gujarat riots and the history that surrounds them. But having said that, we don’t want to focus on the past. We want to look to the future. It is in both our countries’ interests — countries that are both nuclear powers, countries that face incredible challenges as far as poverty and climate are concerned. Our peoples want to live in peace as peaceful neighbours.

Q: As you mentioned, your mother, Benazir Bhutto, was assassinated in a terrorist attack in 2007. Some people say that had she lived, Pakistan would be a different place.

A: Oh, I think absolutely. I think that not only would Pakistan be a different place, but our region would have gone in a different direction. She had a vision and clarity that no one had at the time.

Q: She wanted to make Pakistan a more democratic country?

A: Absolutely. The entire purpose of the Pakistan People’s Party has been for Pakistan to be a democratic country. We believe that democracy is the only way to take on extremism and terrorism. She was the best answer to all the terrorists and extremists. She spoke with a clarity and a bravery that all the male politicians put together at the time could not.

Q: Where were you when she was assassinated?

A: I was a freshman at Oxford.

Q: It must have been hard for you to decide to go into politics in Pakistan.

A: My mother used to say that she didn’t choose this life, it chose her. I feel much the same way. Following my mother’s assassination, my party thought that it was important for me to take a ceremonial role in leading the party to keep our party united.

Mr Khan was elected prime minister in 2018, and he conducted himself in a manner that undermined our democracy and constitution and everything that my party and my mother believed in. At that time, I started taking an active role in Pakistani politics. I was in the opposition against him and played a significant role in convincing our allies to bring about the vote of no confidence against him. We were ultimately successful in removing him from power. Now, I want to work with other political parties to strengthen democracy in Pakistan, address our problems on the international stage, address our economic issues, and work towards that unfulfilled mission that my mother had.

Q: Do you think you could become prime minister this year?

A: I would have to win an election first. Obviously, my party will be hoping that we win. My party has its own manifesto, and given the challenges that Pakistan faces, I believe that our manifesto speaks best to the country’s key problems, such as inflation and unemployment.

However, I don’t believe that any one party will be able to solve all of Pakistan’s problems. If [our party wins the most votes], I will seek to form a government as prime minister and have a coalition.