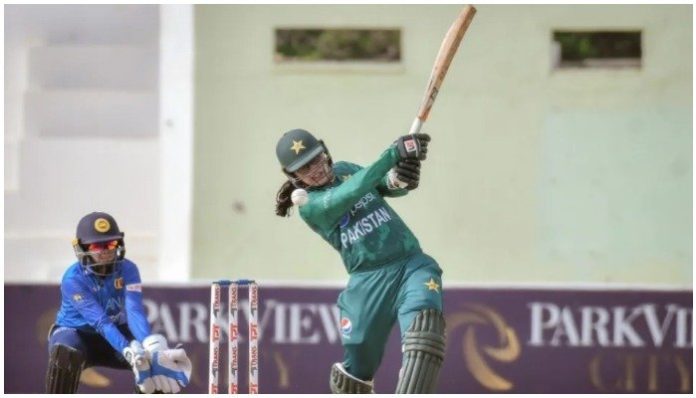 Abbottabad-born Ayesha, playing her ninth game, smashed an unbeaten 45 off 31 balls as Pakistan chased the 103-run target after losing just three wickets. Ayesha, who hit five fours and a six, smacked spinner Oshadi Ranasinghe for a glorious four to enable Pakistan to reach the target with 17 balls to spare.

Ayesha, who made her T20 International debut on July 12, 2021, against West Indies, added 70 runs off 58 balls for the fourth wicket unbroken stand with skipper Bismah Maroof, who chipped in with an unbeaten 29-ball 22 with one four.

Ayesha had a slow start, but when she got settled she managed a few superb strokes that took the game away from the visitors.

“I just waited for the balls, which were my strength,” Ayesha said after her stunning feat.

Chasing a low total, Pakistan’s top order did not start well and were at one stage reduced to 34-3 in the eighth over.

It was another bad day for newly-inserted opener Gull Feroza. After having failed to open her account in her debut game on Tuesday, the right-hander once again fell cheaply when she was excellently caught by Nilakshi de Silva off Achini Kulasuriya (1-11) for just three.

After opting to bat first for the second successive time, Sri Lanka had a slow start and were just 28-2 in seven overs. Lack of intent to score quick runs and some intelligent bowling from the Pakistani bowlers sunk them completely as they were restricted to another low total of 102-6. Opener Hasini Perera remained impressive, scoring a 51-ball 35 with one four before being removed by leggie Tuba Hassan who once again bowled really well, finishing with 1-13 in four overs.

Nilakshi de Silva (21) and Hershita Madavi (16) were the only others who entered double figures.

Fatima Sana, Aiman Anwar, Anam Amin, Nida Dar and Tuba all took one wicket each. Ayesha Naseem was adjudged the player of the match.

“We should have scored 130. I got out early and Pakistani bowlers also bowled with great line and length,” Sri Lanka skipper Chamari Athpaththu said. “It’s a game of boundaries and it’s not enough to take singles and twos,” she added.

Pakistan skipper Bismah Maroof was happy with the performance of her team. “It’s good that we won the series. We are backing the youngsters. In the previous game Tuba did well and today Ayesha was fantastic. We will sit and decide whether we should use the bench in the third game,” she said.

The third and final show of the series will be conducted on Saturday (tomorrow) at the same venue.