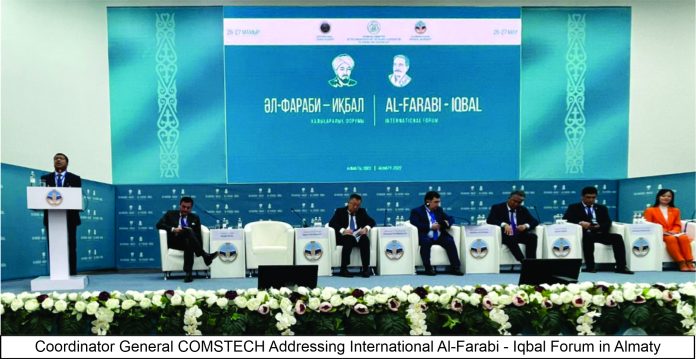 Islamabad,: Almaty hosted the International “Al-Farabi – Iqbal” forum organized jointly by the International Turkic Academy, Al-Farabi Kazakh National University and the Ministerial Standing Committee on Scientific and Technological Cooperation of the Organization of Islamic Cooperation (COMSTECH) during May 26-27.

The forum was opened by the speeches of the President of the International Turkic Academy, Coordinator General of COMSTECH, Chairman-Rector of Al-Farabi Kazakh National University, Deputy Minister of Education and Science along with representatives of international organizations.

The forum was held in offline and online formats, attended by scholars from the Turkic countries and the OIC member states, representatives of the intelligentsia, members of the diplomatic and parliamentary corps, experts.

Several books such as proceedings of the “Al-Farabi Global Forum” held in Islamabad in 2020, in English, Kazakh and Russian languages, Allama Muhammad Iqbal’s book “Reconstruction of Islamic Thought”, in Azerbaijani language, Al-Farabi’s book “El-Farabi Kitabu’l Musika’l-Kebir” in Turkish language, and “Encyclopedia of Iqbal” in Urdu have been presented in the forum.

The forum conducted plenary sessions on “Iqbal’s Philosophy: Past, Present, and Future”, “The Global Impact of Iqbal’s Philosophy and Poetry”, and “The Challenges of the 21st Century and Technology”.

The sessions were attended by prominent scientists and experts from Azerbaijan, Kazakhstan, Kyrgyzstan, Türkiye, Pakistan, Great Britain, Russia, Tajikistan and the OIC member states, and made presentations on research topics.

It should be noted that in 2020, COMSTECH organized a large-scale event dedicated to Al-Farabi in Islamabad. In accordance with the agreement made during that forum and in line with the instructions of the President of Kazakhstan, Kassym-Zhomart Tokayev on strengthening science and technology given at the VIII Summit of the Organization of Turkic States, the “Al-Farabi-Iqbal” forum has been organized.