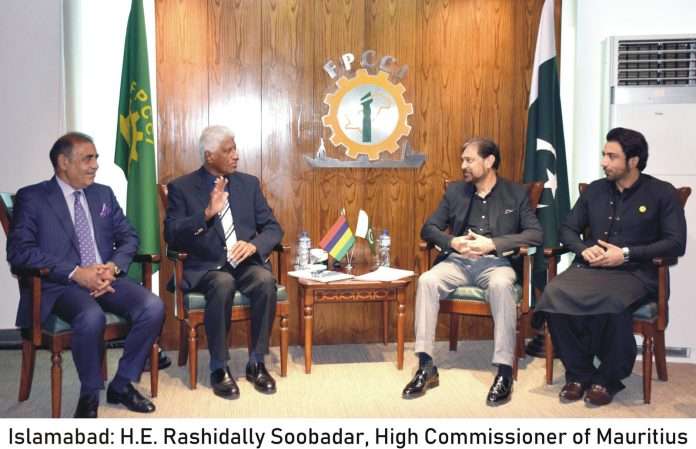 H.E. Rashidally Soobadar,  said that Mauritius was importing many products from India and China while Pakistan could promote its exports to his country by ensuring the high quality of its products and skilled human resources. He said both countries could also increase cooperation in the tourism sector to achieve mutually beneficial results. He said that Mauritius is a stepping-stone for Pakistan to enter into the markets of Southern and Eastern Africa and Pakistan should further strengthen its cooperation with Mauritius to get better access to African markets.

He further said that The Preferential Trade Agreement (PTA) was signed in 2007 between the two countries but no efforts were made to enhance the bilateral trade relations, but unfortunately, it was dumped. He assured that he would facilitate the Pakistani private sector for further enhancing bilateral trade and economic relations between Pakistan and Mauritius. The high commissioner said that Mauritius wants to enhance trade relations with Pakistan. Business communities of both sides must interact with each other to boost trade volume between the two countries. “We would like to share the knowledge and expertise with the Pakistani business community”, he added.

Mr. Irfan Iqbal Sheik, President Federation of Pakistan Chambers of Commerce & Industry (FPCCI) said that the bilateral trade between the two countries was still far less than their actual potential. He stressed that both countries must encourage their private sectors to explore new avenues for improving trade volume. He said many Pakistani products including meat, fruits, food, textiles products, and others could find good markets in Mauritius at competitive prices and urged that Mauritius should focus on enhancing its imports from Pakistan. He said both countries should make efforts to establish direct air links that would help in improving people-to-people contacts and bilateral trade as well. He said that Pakistan intends to have a more engaging and active relationship with all African countries. Mauritius is a gateway to African countries therefore; it offers huge opportunities to Pakistani businesspersons desirous of winning those markets. Mauritius has a huge scope for Pakistani products, especially textiles; cosmetics, cotton, cereals, pharmaceutical, and plastic, and these marvelous opportunities must be tapped.

Mr. Umar Masood Ur Rehman Vice President Federation of Pakistan Chambers of Commerce & Industry (FPCCI) observed that Mauritius and Pakistan have longstanding historical relations while sharing almost the same tradition, culture and roots. He expressed hope that, bilateral relations between the two countries will be further strengthened. VP FPCCI said that there is a huge scope for expansion in trade and the private sector has the responsibility to become front-runner in creating new avenues for establishing trade and investment relations. He said that sustainable efforts are required to give a quick boost to bilateral trade that is much below the respective potential of the two countries.

Speeking the occasion, Mr. Sohail Altaf, Riaz Khattak, Abdul Razaq Sheikh,  Saqib Rafiq and Asad Mashadi shared their views that Pakistani products are the best in the world and have the potential to get a suitable share in the Mauritius market. It is need of the hour to strengthen bilateral trade relations through effective communication, connectivity between the two countries.