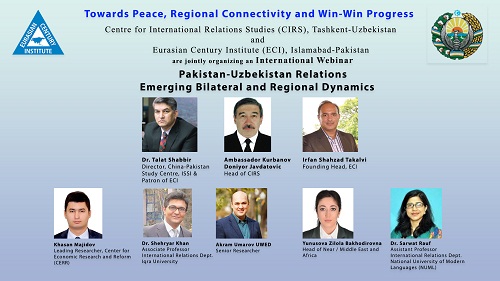 Pakistan-Uzbekistan relations are moving on a positive trajectory. Initiatives taken by the two sides are not only strengthening bilateral cooperation but also contributing immensely for regional peace and stability. Patricianly, the planned Uzbekistan-Afghanistan-Pakistan connectivity through roads and railway set the stage for greater regional cooperation between Central and South Asia.

The webinar noted that the visit of Uzbek Foreign Minister Dr Abdulaziz Kamilov to Pakistan on March 9 and 10 was highly successful, taking the ties between the two countries further higher. The trip, in continuation of high level exchanges between the top leadership of the two countries witnessed in recent times, helped in further intensifying the atmosphere of cordiality and pushed the moves for bilateral and regional cooperation.

Webinar participants noted that already built and planned Uzbekistan-Afghanistan-Pakistan connectivity initiatives particularly the railway linkage agreed upon by the three countries would usher the two regions of Central and South Asia into a new era of commercial cooperation and people-to-people contact. This connectivity would help the three partner countries and other players in the region to optimally utilize potential for collaboration in economic, developmental, social and people-to-people spheres.

However, the participants noted, that peace and stability not only in Afghanistan – for which the chances are seemingly brightening – but also on both sides of Pak-Afghan border would be crucial for any lasting connectivity and cooperation between Uzbekistan and Pakistan and between south and central Asia.