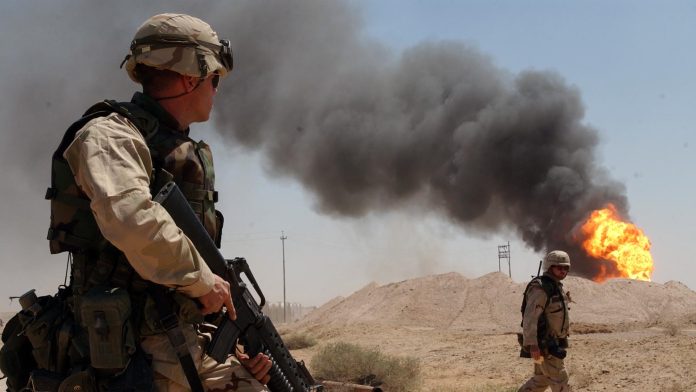 Islamabad, AUG 22: Mehmood Ul Hassan Khan, Executive Director of the Center for South Asia & International Studies (CSAIS) said that as usual, the western media was very enthusiastic about the US president Joe Biden’s latest trip to the Middle East.

The media rated it as “successful” and “fruitful” in terms of economic partnerships, security deals and political consultations on different regional as well as international issues, he stated it in an article carried by Gwadar Pro on Monday.
In this connection, the shades of brutal history and inhuman acts of prejudices, indecencies, and even genocides of the US in the Middle East and beyond have never faded.
According to Dr. Mehmood ul Hassan, to highlight this undeniable truth of the past, the China Society for Human Rights Studies (CSHRS) released a comprehensive report titled “US Commits Serious Crimes of Violating Human Rights in the Middle East and Beyond,” narrating and revealing a series of grave crimes committed by the US in the Middle East and surrounding areas that have seriously violated the basic human rights and caused permanent personal damages, collateral losses and irreparable scars to countries and people in the regions.
The said report was issued ahead of the first anniversary of the US’ hasty withdrawal of troops from Afghanistan that subsequently created a colossal humanitarian crisis. It clearly indicated the nature of American hegemony and exposed the barbarity, cruelty and perniciousness of its power politics.

Now people of the world would have a better understanding of the duplicity of American democracy and the so-called “American-style human rights” that feature hypocrisy and deception.

It emphasized Washington’s violations of human rights, including launching wars, massacring civilians, and damaging the right to life and survival. The US government has been indulged in infamous forced transformation, unilateral socio-economic and political sanctions, and severe breach of people’s basic rights to development, life and health.
The US intentionally created “clash of civilizations”, abused imprisonment and torture, and violated freedom of religion and human dignity in the Middle East and surrounding areas.
The US tried to use its so-called democratic system to reform Afghanistan and abandoned the country when the reform miserably failed with total disregard for the most basic humanitarian issues.
Moreover, the US did not deliver the frozen financial assets of Afghanistan which further deteriorated their socio-economic worries. Simply, the US government and its military establishment only protected their own vested interest and ruined the prospects of peaceful and prosperous lives in many countries of the Middle East, mainly Iraq, Syria, Iran, Lebanon, and many countries in North Africa, too.
Resultantly, many countries suffer from unlimited human miseries, unbearable financial burdens, and weak economies, due to which social fabric has been intentionally dismantled and political systems remain like a witch hunt.
The report also shared that the US not only rallied its allies to launch the Gulf War (1990-1991), the Afghanistan War (2001-2021), the Iraq War (2003-2011), and so on, but also was deeply involved in the Libyan War and the Syrian War, creating humanitarian disasters rarely seen in the world. Even its alleged role in falling Yemen is susceptible.
Under the pretext of democracy and human rights, the real intention of the US’ cruel actions against foreign countries and regions has been to serve the interests of its domestic elite groups and its military-industrial complex.
Sadly, the constant warmongering and dissemination of the military doctrine of “Whether you are with us or with enemies” has caused direct, serious and lasting damage to local people’s rights to life and survival. The US plundered their resources, doled out their oil & gas reserves, and damaged their bio-diversity.
Because of the US constant military operations and drone attacks in Afghanistan, now it has the highest number of people in food insecurity in the world nearly one year after US troops’ withdrawal, according to a UN report, with more than 23 million in need of immediate assistance, and approximately 95 percent of the population having insufficient food.
The vulnerability of more than 4 million internally displaced people, including people belonging to minorities, and over 3.5 million seeking refuge in neighboring countries are the main worries of Afghan regime which urgently needs humanitarian assistance.
The US claims that it is the beacon of human rights, but it is actually seriously encroaching the rights to life and property of people in other countries. Its protection of human rights is exclusive to a small group of people, and this has also been demonstrated by gross inequalities among different nationalities and the problem of racism within the US.

The US is famous for opinion making and shifting public attention. Nearly one year after the withdrawal of troops from Afghanistan, the US has successfully shifted the focus of the international community by trying to pass the buck to China and Russia, manipulating the ongoing Russia-Ukraine conflict, scheming NATO eastward expansion and most recently disturbing peace and stability in Indo-Pacific region through the visit of the US House Speaker Nancy Pelosi to Taiwan.
To conclude, there is an impassable dichotomy between the US principles of the so-called “democratic norms” and its tangible acts in violation of basic human rights. The US should be held responsible for the current situation in Afghanistan and other trodden countries and take meaningful steps to compensate them, Dr. Hassan added.