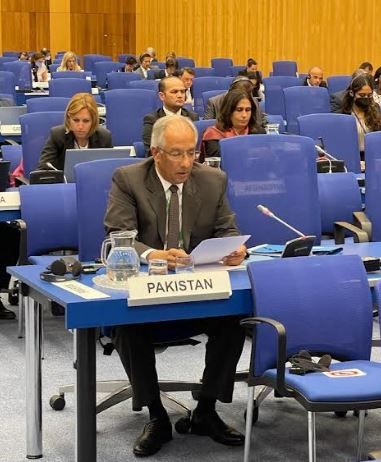 VIENNA, MAY 16 /DNA/ – Ambassador Aftab Ahmad Khokher addressed the 31st Session of the Commission on Crime Prevention and Criminal Justice (CCPCJ), being held in Vienna. He said that crime, in its various forms, including transnational organized crime, corruption and terrorism continue to be a challenge. He added that criminals and criminal organizations threaten the peace and stability of our societies, undermining efforts aimed at promoting human rights and sustainable development. He urged on need to continue with efforts at national, regional and international levels to prevent and combat crime effectively.

He warned that the Crime including terrorism cannot and should not be associated with any religion, civilization, nationality or ethnicity. Ambassador Aftab Khokher said that there was a steep rise in incidents of hate speech and hate crimes, and also actions which cause incitement to hatred and result in intolerance, discrimination, hostility and violence against persons on the basis of their race, ethnicity, religion or belief in all regions of the world. He said that the adoption of Organization of Islamic Cooperation (OIC) sponsored resolution, which was steered by Pakistan, by United Nations General Assembly (UNGA) declaring 15 March as the “International Day to Combat Islamophobia” was a step in the right direction.

He said that the resolution, which was passed by consensus called upon the Members States to commemorate this day to highlight the challenges of racism, discrimination and violence against Muslims and promote a message of tolerance, peaceful co-existence and interfaith and cultural harmony. Ambassador Aftab Khokher said that trafficking in persons and smuggling of migrants warranted continuous focus and attention. He reiterated Pakistan’s commitment to combating Trafficking in Persons focusing on prevention, respect of rights and effective law enforcement. He emphasized that free and legal movement of labor, like other factors of production, was the only answer to fully exploit the potentials of global economy. ​Ambassador Aftab Khokher said that there was also an urgent need of addressing the gaps, barriers and challenges in the international anti-corruption framework particularly on asset recovery by considering an additional dedicated protocol on asset recovery and return as part of the United Nations Convention against Corruption (UNCAC) with a view to remove the obstacles and overcome challenges. ​Ambassador Khokher said that Pakistan was committed to counter crimes against women and children in our society and improve the existing legislative framework to combat physical violence against females. He shared that the Parliament of Pakistan had recently promulgated the Anti-Rape (Investigation and Trial), Act, 2021, which was the first of its kind comprehensive law dealing with crimes of physical abuse and violence against women and children.