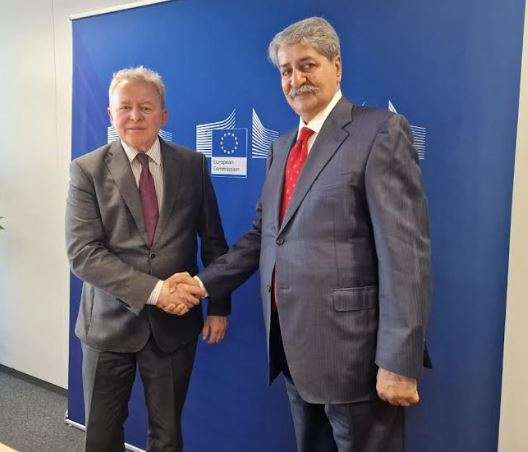 DNA
Brussels, OCT 24: The Federal Minister for Commerce and Investment, Syed Naveed Qamar, met the Chair of the European Parliament’s committee for International Trade, MEP Bernd Lange, in Brussels, today.  The Ambassador of Pakistan to Belgium, Luxembourg and the European Union, Dr. Asad Majeed Khan and other officials were also present during the meeting.

The Commerce Minister underscored that trade and investment ties were a key component of Pakistan’s multifaceted relationship with the EU. The GSP Plus has been a mutually beneficial undertaking that played an important part in the growth of Pakistan’s bilateral trade with the EU countries, he added.
The Minister highlighted that economic stabilization and growth were the key priorities of the current government particularly in the aftermath of the devastating floods and the EU remains a major partner for Pakistan to realize these objectives.

Minister Qamar emphasized that the GSP Plus was an excellent model for mutually beneficial cooperation between the two sides, as Pakistan’s export to the EU has increased by 86 percent whereas the EU’s exports to Pakistan grew by 69 percent, since inception of the scheme in 2014. He expressed the hope that the new GSP Plus regulation would continue to focus on its central tenets of supporting sustainable development, poverty alleviation and good governance in the beneficiary countries.

The Chair INTA Committee MEP Lange thanked the Commerce Minister and agreed to work together in further strengthening Pakistan-EU relations, including enhanced exchanges.

In a separate interaction, Minister Qamar met the Standing Rapporteur of Trade Monitoring Group for South Asia in the Committee on International Trade, MEP Maximilian Krah and briefed the MEP about ways and means to further strengthen Pak EU trade and investment relations.

The Federal Minister for Commerce and Investment is visiting Brussels on a weeklong official visit from October 23 to 29, 2022.