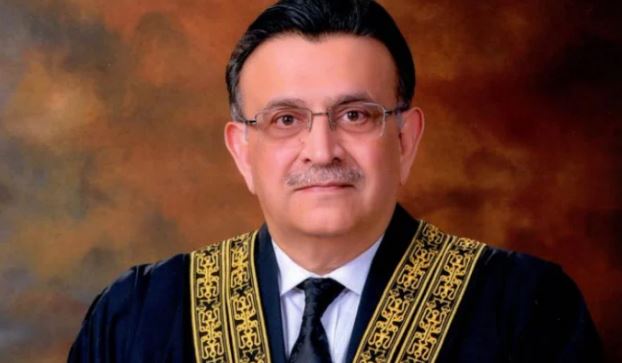 ISLAMABAD, NOV 8: Chief Justice of Pakistan Umar Ata Bandial has suggested putting up a screen to televise the much-hyped semi-final of the T20 World Cup between Pakistan and New Zealand.

The excitement is gripping the entire country as Pakistan is set to take on New Zealand in the semi final after the Green Shirts unexpectedly snuck into the last four by sending Bangladesh packing.

The match came under discussion in the Supreme Court during the hearing of a case pertaining to the NAB Ordinance 1999 amendments on Tuesday.

The lawyers objected to the deferral of the court’s proceedings till Wednesday, saying that the semi-final match of Pakistan has to be played on Wednesday.

“The match will start at 1pm,” lawyer Makhdoom Ali Khan said while requesting the court not to adjourn the hearing till then.

At this, CJP Bandial said that he didn’t even know about it.

Why don’t we skip the hearing of the case tomorrow due to the semi-final, he asked.

“If you don’t mind we’ll watch the match while you continue giving arguments,” Justice Shah said, convincing him to spare Wednesday as he himself is a cricket fan.

“Let’s put up a screen outside the court for the match. I pray that Pakistan wins the semi-final,” the CJP said, adding that they will wrap up tomorrow’s hearing early by the time the match is in a good situation.