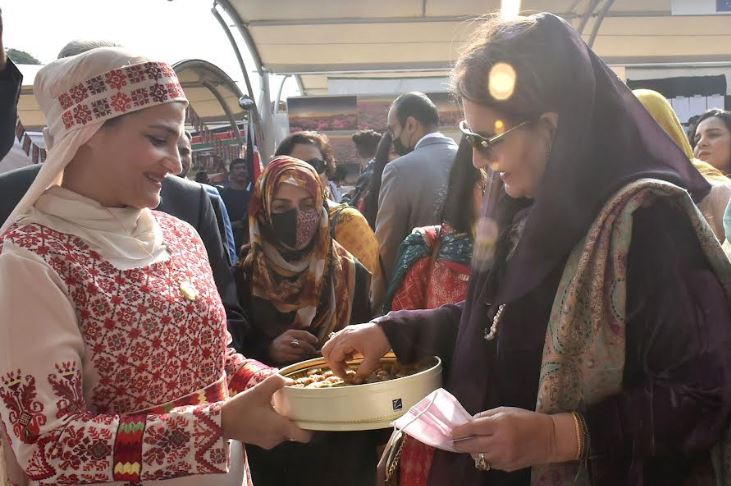 ISLAMABAD, NOV 27 /DNA/ – The Embassy of the State of Palestine in Islamabad participated in the annual charity Bazaar held by the Pakistani Foreign Ministry in cooperation with the Association of Ambassadors wives with a heritage exhibition that included Palestinian embroideries and traditional folk wear for men and women, paintings, seashell artwork, figurines, pictures resembling the Palestinian blessings that good has bestowed upon us such as the Holy Mosque of Al-Aqsa, Jerusalem, pictures of Palestinian cities as well as an exhibition of the Palestinian cuisine that mainly incorporates olive oil, olives, thyme and other Palestinian ingredients that symbolize the Palestinian reality and our peoples’ resilience against the Israeli occupation and its continuous atrocities. A Dabke show was also held by the Palestinian students in the universities of Pakistan.

This participation was aimed at increasing the awareness about Palestine’s heritage that the Israeli occupation is trying to steal and erase the identity of, and also to donate the profits of the Bazaar to the charity. Pakistan’s first lady, Mrs. Thamina, the wife of his excellency President Aref Alawi, accompanied by the wife of his Excellency the Foreign Affairs Minister, and the wife of the Foreign Affairs Deputy Minister, the general supervisor of the charity bazaar in the Palestinian pavilion, which was visited by people who attended the bazaar and showed interest and admiration for it.On this occasion, I extend my gratitude, thanks and appreciation to the General union of Palestinian students and our dear students, our dear community and the staff of our embassy for their work as a team, and  I avail myself this opportunity to express gratitude to the Pakistani Ministry of Foreign Affairs and the Association of Ambassadors’ wives on the success of this charitable bazaar.