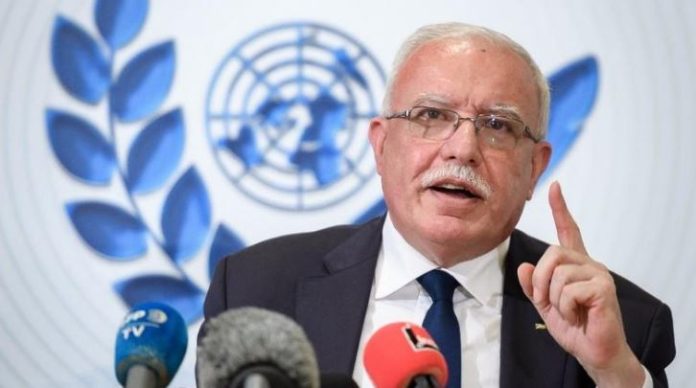 RAMALLAH, NOV 12 /DNA/ – Riyad Al-Malki, Minister of Foreign Affairs and Expatriates, welcomed voted unanimously in favor of 5 resolutions for Palestine in the Fourth Committee of the General Assembly, the Special Political and Decolonization Committee, which will be adopted later in the General Assembly.  According to international law, these resolutions affirm the legitimate rights of our Palestinian people, foremost of which is the right to self-determination and the right of refugees to return to their homes, and the rejection of the settlements as illegal. These resolutions are:

1- The operations of the United Nations Relief and Works Agency for Palestine Refugees in the Near East (UNRWA) and voted in favor of: (164) countries, and against the resolution: (6) countries, (5) countries abstained.

2- Providing assistance to Palestinian refugees, and 165 countries voted in favor of it, 10 countries abstained, and the occupying power was isolated by voting against the resolution alone.

4- The decision of the Israeli settlements and Israeli practices in the occupied Palestinian territory, including East Jerusalem and the occupied Syrian Golan. 150 countries voted in favour, and voted against the resolution: (8) countries, and 14 countries abstained.

Al-Maliki stressed the importance of the decisions and the position of the international community and its unanimous vote on the important role played by the United Nations Relief and Works Agency (UNRWA), in providing humanitarian and development assistance to refugees, extending the agency’s mandate for 3 years, and enabling it to continue its work without hindrances.

Al-Maliki welcomed the vote in favor of these resolutions and thanked the brotherly and friendly countries that sponsored and adopted the resolution, and called on the countries that did not support the resolution to re-read the Charter of the United Nations and its resolutions, in addition to international law and its principles, and not to use double standards, and to return to the right track of history.

Al-Maliki stressed that settlement operations, colonial settlement expansion, evictions and forced displacement of the Palestinian people from their lands and properties are crimes that Israel and its various tools must be held accountable for.

Al-Maliki condemned all other practices committed by the settlers, settlers in the land of the State of Palestine, and against its people, such as acts of violence, destruction, harassment, provocation and incitement, and called for the necessity of implementing United Nations resolutions, including Security Council resolutions, especially resolution 904 (1994), which obliges the occupation to take measures  It includes confiscating weapons from colonial settlers, stopping their crimes, and ensuring protection for our people.

In conclusion, Al-Maliki stressed the continuation of Palestinian diplomacy in implementing the decisions of the political leadership, headed by President Mahmoud Abbas, to confront the Israeli colonial system, and to work to preserve the rights of our people and ensure their protection until the end of the Israeli occupation, until the inalienable rights are achieved.