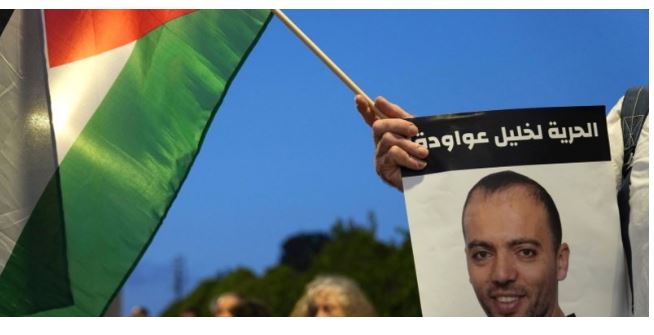 Four Palestinian prisoners have vowed to continue their hunger strike to protest their indefinite detention without trial by Israel, according to a local NGO.

Among the striking detainees is Khalil Awawdeh, who has been on hunger strike for 165 days, the Palestinian Prisoner Society said in a statement.

As part of an Egyptian-brokered cease-fire that brought a recent Israeli offensive on Gaza to a halt last week, Cairo said it will seek to ensure the release of Awawdeh and Islamic Jihad detainee Bassam Al-Saadi.

Israeli authorities transferred Awawdeh to hospital on Thursday as his health deteriorated.

The NGO said two other detainees have staged a hunger strike nine days ago to protest their administrative detention without charge or trial.

“An Arab-Israeli has also been on hunger strike for the fifth day in a row to protest his detention,” the statement said, adding that the detainee has been hospitalized as his health deteriorated.

For years, Palestinians jailed by Israel have used these protests to demand better living conditions and an end to indefinite detentions.