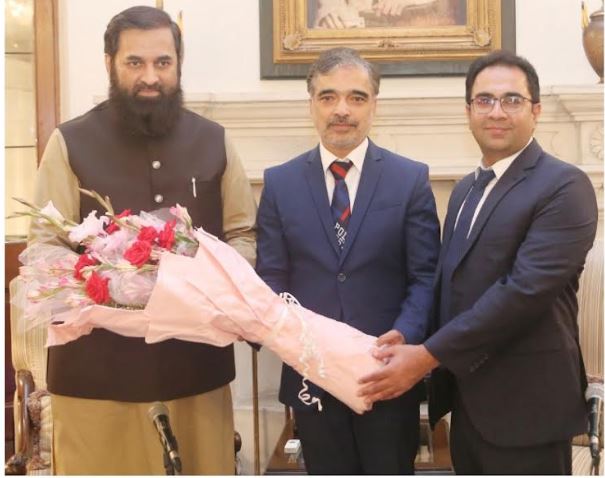 Lahore, /DNA/ – A high level delegation of Pakistan Industrial & Traders Associations Front (PIAF) in the lead of its Chairman Faheem Ur Rehman Saigol called on Punjab Governor Baligh-ur-Rehman at Governor House here. During the meeting the delegation briefed the governor about the problems faced by the business community along with suggestions for their solution.

Talking to the PIAF delegation, Punjab Governor said that the role of business community is vital for the economic uplift and stability of the country. He appreciated the role being played by the private sector, particularly the PIAF, in the country’s economic development. He said at present, tough economic conditions called for taking difficult decisions but the government was committed to improve the economy. He also stressed the need for technical education’s close linkage with the industry. He said the government gives great importance to the business community and would continue to support them by resolving their problems on top priority.

He said that now the economy was taking off in all sectors and showing upward trends of hopeful indicators. He added the prime minister kept on having direct interaction with the private sector to address their problems to accelerate economic activities in the country.

Addressing the meeting PIAF chairman Faheem Ur Rehman Saigol called for taking all steps to ensure a business and investment-friendly environment as it was imperative for economic progress and prosperity of the country.

Pointing out the problems being faced by the trade and industrial sectors, he stressed the need for providing a level-playing field to the business community. The government should also reduce the cost of doing business by ensuring supply of energy at concessional tariff especially for SMEs sector, he added.

Faheem Ur Rehman Saigol observed that in view of achieving economic growth through consistency in policies, the government will have to take solid measures to strengthen the trade and industry, especially the SMEs, saving the livelihood of millions of workers associated with the small businesses.

PIAF Chairman observed that the successive governments should pursue the same set of objectives and try to maintain consistent policies for a long-term of at least 10 years. The government should focus on the industrial sector in order to take the economy forward. Neglecting the industrial sector at this juncture will further aggravate the balance of payments situation, he added.

PIAF Chairman also apprised the governor of the functioning of industrial estates in Lahore and gave recommendations for improving their structure and overall business environment in the country. In response, the governor assured the delegation of his full support.