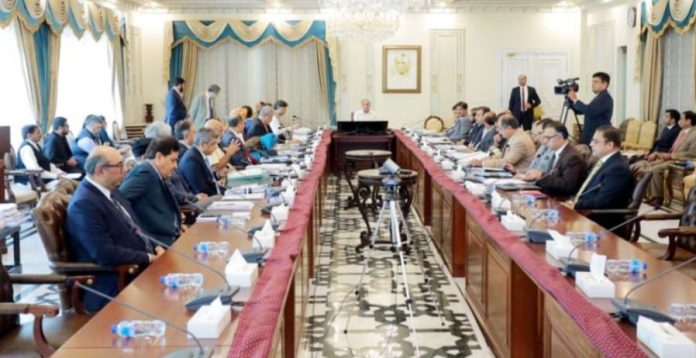 • Consolidated public sector investment targeted at Rs2.184tr
• 60pc of federal PSDP to be spent on ongoing projects
• Growth in agriculture, services and manufacturing eyed at 3.9pc, 5.1pc and 7.1pc, respectively

ISLAMABAD: The National Economic Council (NEC) on Wednesday set next year’s economic growth rate target at five per cent with a Rs2.184 trillion worth of consolidated public sector investment — almost unchanged from Rs2.135tr development allocation in the current year.

The meeting of the NEC — the country’s highest economic decision-making body — was presided over by Prime Minister Shehbaz Sharif. Chief ministers of three provinces other than Khyber Pakhtunkhwa and other members of the council attended.

The participants unanimously decided that every effort would be made to reach 6pc growth rate next year.

Officials said the consolidated size of the national development budget was set at Rs2.184tr, which included the federal allocation of Rs800 billion against the current year’s allocation of Rs900bn, although the meeting was informed that total federal expenditure would stand restricted at Rs550bn.

The provinces would separately formulate their annual development plans worth Rs1.384tr in aggregate against Rs1.235tr for the current year, showing an increase of over 12pc.

The council also unanimously decided that 60pc of the federal public sector development programme (PSDP) would be spent on ongoing development projects and the remaining 40pc on new projects. This would help accommodate maximum projects of the coalition partners ahead of general elections next year, an official said.

An official statement quoted the prime minister as telling the NEC members that the top priority for next year’s development agenda would be to improve the lives of the people by utilising the full capacity of the federal and provincial administrations.

The government would focus on developing infrastructure, improving governance and ensuring uninterrupted and affordable energy, quality education and basic health facilities for all without discrimination.

The NEC was a representative forum of national unity and cohesion, he said, adding that its key theme of coordinated efforts by the centre and the provinces for national harmony should be guiding principles.

He said “unwise” policy measures taken by the previous government had created a situation where the country was now facing both internal and external economic challenges like poverty, inflation, unemployment and instability.

The NEC also approved the Macroeconomic Framework for Annual Plan 2022-23, which envisaged 5pc growth rate on the back of agriculture (3.9pc), manufacturing (7.1pc) and services (5.1pc) sectors.

The investment will also be moderated because of fiscal and current account compression, whereas inflation will stay in double digits (11.5pc) as global inflationary pressures will not taper off very quickly.

The projected growth of 3.9pc in the agricultural sector mainly depended on the revival of cotton and wheat production, consistent availability of water, certified seeds, fertilisers, pesticides and agriculture credit facilities.

Revival of both these crops will not only support growth momentum but will also ease out balance-of-payments pressures through fewer import requirements.

Under the annual plan, elevated industrial performance over the past two years is expected to consolidate, whereas augmented production capacity during these years will anchor the growth momentum. However, the growth momentum will be moderated owing to fiscal consolidation efforts.

The service sector will also be subject to moderation in growth and is targeted to grow by 5.1pc in 2022-23. Expected performance in both agriculture and industrial sectors will complement the targeted growth in the service sector.

The investment level for the year 2022-23 is expected to decrease slightly to 14.7pc of GDP due to stabilisation and an uncertain economic environment.

Besides, fixed investment is expected to grow by 13pc on a nominal basis. However, as percentage of GDP, it will marginally fall to 13pc of GDP, while the national savings rate is targeted at 12.5pc of GDP.