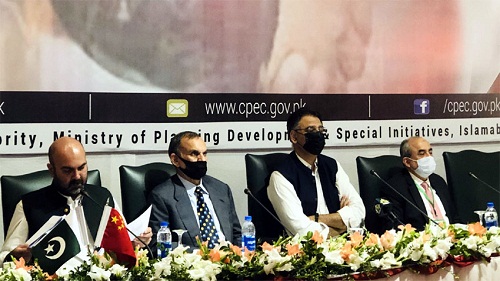 Addressing the 10th Joint Coordination Committee on CPEC on Thursday, he said the government considers the project critical for future growth and development of the country.

The Minister for Planning and Development said all the federal and provincial governments as well as political parties are supportive of and standing behind the corridor project.

Asad Umar expressed the confidence that they will realize the vision of their two leaders and meet the expectations of their nations by working together.

The Minister for Planning and Development pointed out the first phase of the CPEC has already provided dividends in the shape of filling in voids in energy and communication infrastructure. He said the phase two of the project is now successfully underway, which has a much broader scope of cooperation. An accelerated industrial cooperation in the form of Special Economic Zones are the testimony to the broadening and deepening of the CPEC. He said we have also progressed on the development and operationalization of Gwadar Port and Free Zone.

Asad Umar said there has been progress on Ml-1 progress and hoped both the countries will soon enter into the implementation phase in order to upgrade the infrastructure of Pakistan Railways.

The Minister for Planning said it has been decided to establish a dedicated investor facilitation center for Chinese companies to fully facilitate the Chinese investment in the country. We have also brought about significant improvement in the visa regime for the Chinese workers and investors.

As regards the security of the CPEC related projects, Asad Umar many countries in the world are unhappy and nervous by the successful development of the CPEC. He said Pakistan has designed an expanded security system which has been shared with the Chinese side to provide secure working environment to those working on the corridor related projects.

Alluding to various projects being executed under the CPEC, the Vice Chairman of Chinese National Development & Reform Commission said Pakistan-China friendship is unbreakable.