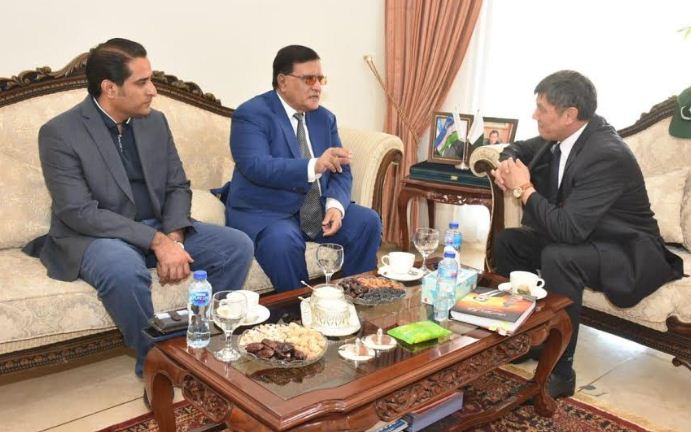 The extension of ML-1 rail project between Uzbekistan and Pakistan will be a breakthrough for centuries. Zafar Bakhtawari

ISLAMABAD, JUN 25 (DNA) – The Ambassador of Uzbekistan, Aybek Arif Usmanov, has said that the road and rail link from Karachi and Gwadar to Uzbekistan via Peshawar will be an important milestone in regional cooperation. And it is not appropriate to wait for peace in Afghanistan.

The prime Minister of Pakistan Imran Khan  will be attending the  conference of the countries of  South Asian and Central Asia  in Tashkent on July 13 as a special guest and it will in a mile stone  in regional co-operation.

He expressed these views at his Embassy here on Friday while talking to Zafar Bakhtawari, Chairman,  Pakistan  Central Asia Friendship Association. he said that the people of Uzbekistan are eagerly awaiting the visit of Imran Khan and Minister of Commerce Abdul Razzaq Daud will attend the Uzbek-Pakistan Business Forum on July 12. He said that airline service between Pakistan and Uzbekistan would be resumed  from July.

Zafar Bakhtawari said on the occasion that the dream of the Pakistani people is to reach Tashkent in four hours by train from Islamabad. And the ML-1 project will be an important step in fulfilling that dream. We have wasted thirty years in realizing this dream and now our future generations will not forgive us for further delay in it.