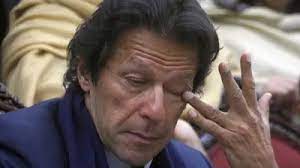 No trust move against him approved; Imran Khan Principle secretary Azam Khan removed from his post;IHC fixes plea for hearing on Monday TO PUT Imran Khan on ECL: Ayaz Sadiq did not cast his vote being the speaker: Attorney General resigns from his post

ISLAMABAD, Prime Minister Imran Khan has been voted out of power. The no trust move against him was approved by the members of the opposition. The govt benches stayed away from voting. Earlier Speaker Asad  Qaisar resigned from his post and asked Ayaz Sadik to conduct voting.

Earlier, The voting on opposition parties’ joint resolution of no-confidence against Prime Minister Imran Khan started in the National Assembly here on Saturday.

Speaker Asad Qaiser, who was in the chair, formally announced his resignation as Speaker and invited a member of panel of chairpersons Ayaz Sadiq to preside over the proceedings of the House. The Chairperson asked for voting on the no-confidence resolution moved by the Leader of the Opposition Mian Muhammad Shehbaz Sharif on March 28, 2022.

He asked for the simple division in favour and against the resolution for members’ count in the 341-seat House (excluding a seat that fell vacant due to the demise of MNA Khayal Zaman Orakzai).

Leader of Opposition in the National Assembly Shehbaz Sharif and PPPP Chairman Bilawal Bhutto Zardari were also present in the House. However, the entire lawmakers from treasury benches excluding Chied whip Aamir Dogar and Minister of State for Parliamentary Affairs Ali Muhammad Khan left the House.

The voting on the resolution for vote of no-confidence against the Prime Minister under Rule 37 of the Rules of Procedure and Conduct of Business in National Assembly 2007 shall be held under the provisions of the Second Schedule.

The Second Schedule states the Chair shall direct that the bells be rung for five minutes before commencement of voting to enable members not present in the Chamber to be present. Immediately after the bells stop ringing, all the entrances to the Lobby shall be locked and the Assembly staff posted at each entrance shall not allow any entry or exit through those entrances until the voting has concluded.

The Speaker shall then read out the resolution before the Assembly and ask the members who wish to vote in favour of the resolution to pass in single file through the entrance where tellers shall be posted to record the votes. On reaching the desk of the tellers, each member shall, in turn, call out the division number allotted to him under the rules. The tellers shall then mark off his number on the division list simultaneously calling out the name of the member. In order to ensure that his vote has been properly recorded, the member shall not move off until he has clearly heard the teller call out his name. After a member has recorded his vote, he shall not return to the Chamber until bells are rung.

When the Speaker finds that all the members who wished to vote have recorded their votes, he shall announce that the voting has concluded. Thereupon the Secretary shall cause the division list to be collected, count the recorded votes and present the result of the count to the Speaker. The Speaker shall then direct that the bells be rung for two minutes to enable the members to return to the Chamber. After the bells stop ringing, the Speaker shall announce the result to the Assembly.