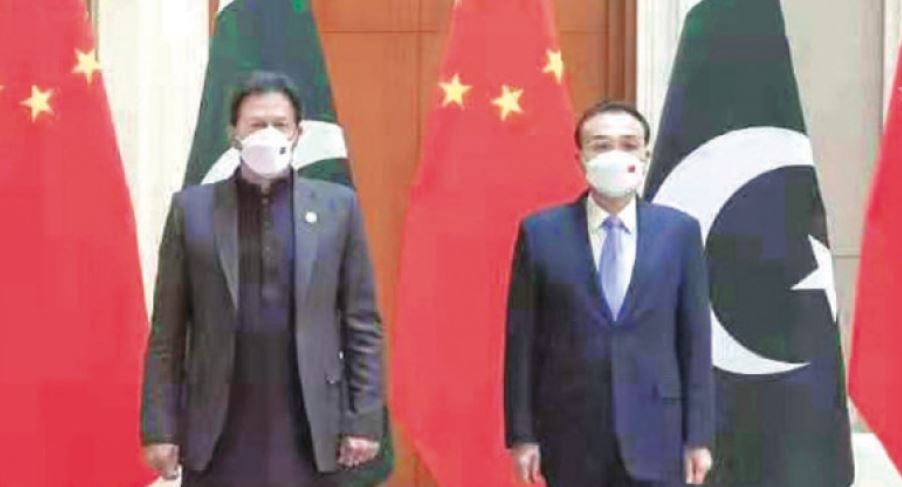 ISLAMABAD / BEIJING: In wide-ranging talks with Chinese premier Li Keqiang, Prime Minister Imran Khan on Saturday underscored the importance of Pakistan and China working together to promote shared objectives of peace, stability and development in Afghanistan and regional connectivity.

Afghanistan along with Kashmir was also the mainstay of Mr Khan’s meeting with President of Uzbekistan Shavkat Mirziyoyev on the sidelines of Beijing Winter Olympics opening ceremony.

During their interaction, marked by traditional sentiments of warmth, deep mutual trust and understanding, Mr Khan and the Chinese premier agreed to work closely on further deepening bilateral economic engagement and reaffirmed their commitment to advance the multifaceted strategic cooperative ties and building the Pakistan-China ‘Community of Shared Future in the New Era’, the PM Office stated.

While expressing willingness to strengthen all-dimensional practical cooperation with Pakistan, Mr Li said China always took Pakistan as a priority in its neighborhood diplomacy, supported Pakistan’s pursuit of prosperity and encouraged Chinese enterprises to invest in the country, according to Xinhua. He said China would actively consider expanding the import of agricultural products from Pakistan.

On the penultimate day of his four-day tour to Beijing, the prime minister met Chinese investors to discuss different projects and attended a luncheon hosted by Chinese President Xi Jinping in honour of visiting heads of state. He was also expected to meet United Nations Secretary General Antonio Guterres in the evening, according to the federal information minister.

During their meeting, the premiers of Pakistan and China reviewed the entire gamut of bilateral ties including discussions on the bilateral economic and trade relations, onward march of China-Pakistan Economic Corridor (CPEC) and important issues of regional and global concern.

PM Khan appreciated the transformational impact of CPEC on Pakistan’s infrastructure, energy, socio-economic development and improvement in livelihoods of the people. He underlined that Pakistan was committed to high quality development of CPEC through its mutually reinforcing industrial, trade, health, digital and green corridors.

He shared with Mr Li the measures taken by the government to provide policy guidance and support for enhanced Chinese investments in the Special Economic Zones and Special Technology Zones, and for safety and security of Chinese nationals, projects and institutions in Pakistan. He also thanked the Chinese government for support and assistance to Pakistan in dealing with the Covid-19 pandemic.

Congratulating Mr Li for organising the Winter Olympics, Mr Khan highlighted that strategic ties between both countries not only served their fundamental interests, but also were important for regional peace and stability.

Exchanging views on the regional security situation, the PM highlighted the serious situation in India-held Kashmir and the importance of urgent action by the international community to alleviate sufferings of the Kashmiri people.

He also reiterated Pakistan’s full support to the Trans-Afghan railway project and exchanged views on next steps in taking it forward over the coming months.

While exchanging views on shared bonds of faith, history and culture, the two leaders reaffirmed their resolve to comprehensively upgrade Pakistan-Uzbekistan partnership across the broad spectrum and continue taking practical steps for implementation of the key projects.