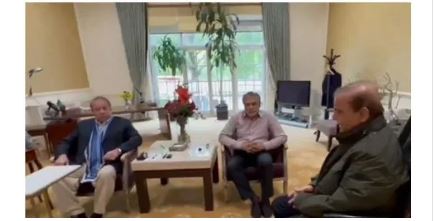 LONDON: Prime Minister Shehbaz Sharif on Saturday reached London to meet PML-N supremo Nawaz Sharif before returning to Pakistan to discuss the ongoing political situation in the country and is expected, among a host of issues, to discuss the PTI’s long march.

PM Shehbaz, along with Minister for Information Marriyum Aurangzeb reached London after attending the 77th United Nations General Assembly (UNGA) in New York a day earlier and is scheduled to leave for Pakistan on Sunday.

The agenda of PM Shehbaz’s meeting with Nawaz. The two leaders are expected to discuss the ongoing situation in the country and measures taken by the sitting coalition government.

Moreover, the strategy to deal with PTI Chief Imran Khan’s call for a long march, and ending PTI’s government in Punjab will also be discussed during the meeting.

It was further learnt that the final decision regarding the elections, whether they should be conducted earlier or not, will also be taken.

The PML-N leaders will also devise a strategy for expediting verdicts in the cases registered against Imran Khan, the sources said.

Prior to his meeting with Nawaz, PM Shehbaz will also chair an online meeting regarding the current flood situation in the country.