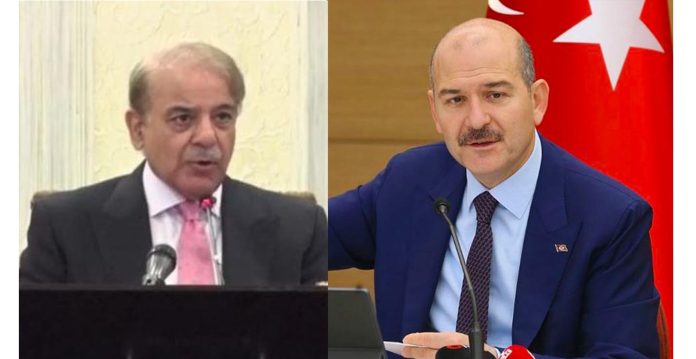 ISLAMABAD, /DNA/ – Prime Minister Shehbaz Sharif on Friday thanked the government and people of Turkiye for extending timely support to the flood-stricken people of Pakistan, manifesting the fraternal ties and brotherhood between the two countries.

Headed by Turkish Interior Minister Suleyman Soylu the delegation is visiting Pakistan to express strong feelings of condolence and solidarity of the government and people of Turkyie with the flood-affected people of Pakistan.

The prime minister welcomed the Turkish delegation and thanked them on behalf of the government and people of Pakistan for their warm gesture.

He expressed his gratitude to President Recep Tayyip Erdogan for his phone call to offer sympathies and condolences over the human and material losses due to the floods and reaffirm Turkiye’s commitment to extend all possible support and dealing with this climate-induced calamity.

He said soon after President Erdogan’s call, Turkiye sent humanitarian relief assistance to Pakistan in the form of tents, food items, medicines and emergency relief goods for the flood victims. So far, 11 Turkish military aircraft and two ‘Goodness Trains’ had been dispatched.

The prime minister said Pakistan was grateful to the Turkish government, people and the business community for sending relief goods for the distressed people of Pakistan within no time.

He said the relief goods were being distributed among the flood victims across all provinces and regions.

Prime Minister Sharif told the delegation that the flash floods had killed over 1000 people including 300 children, besides washing away crops and livestock and rendering millions of the people homeless.

He said he had never seen such a catastrophic situation in his lifetime.

The prime minister recalled Turkiye’s steadfast support and assistance to Pakistan during the 2005 earthquake and 2010 floods. He underlined that Turkiye and Pakistan were “two hearts, with one soul” and had always supported each other during difficult times.

He looked forward to Turkiye’s assistance for overcome the challenges caused by the massive destruction of country’s infrastructure, loss of people’s livelihoods, food shortage and socio-economic insecurity during the reconstruction and rehabilitation phase.

The prime minister also asked the delegation to convey his gratitude to Turkish leadership and people for their heartfelt feelings of grief and support for the people of Pakistan at that hour of devastating natural calamity.

Turkish Interior Minister Suleyman Soylu appreciated the hectic relief efforts of the prime minister and his government for the rescue and relief of the people and rehabilitation of infrastructure hit hard by the catastrophic torrential rains and floods in all parts of the country, especially Balochistan, Sindh, KPK and Southern Punjab.

They especially praised the government for the provision of emergency cash transfer of Rs 25000 per affected household under Benazir Income Support Programme.

The delegation proposed to extend their maximum help to run this cash transfer programme on a sustainable basis in order to meet the expectations of flood victims, and to avoid social shocks in the aftermath of the floods.

He underscored that Turkiye immediately established air and land ‘bridges and fraternity’ to provide relief support to the flood affectees. He added that today, during the Friday prayers, the people in Turkiye would pray for their brothers and sisters in Pakistan and mobilize further support.

The Turkish minister, on behalf of the Turkish government and people, expressed their strong commitment to contribute financially to the relief and rehabilitation efforts of the Government of Pakistan.

The delegation is also scheduled to undertake an aerial on-site visit of the flood-affected areas.