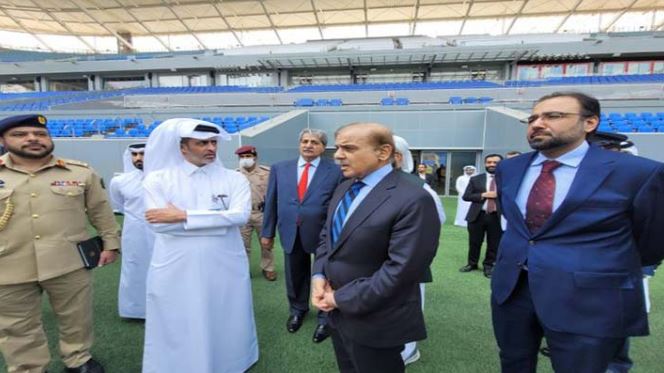 DOHA – Prime Minister Shehbaz Sharif on Wednesday visited FIFA World Cup ‘Stadium 974’ in Doha and lauded the efforts of Qatar in establishing state-of-the-art facilities for the upcoming one of the biggest sporting event.

Upon arrival at the stadium, the prime minister was given the guided tour of the stadium and was briefed on the extensive preparations undertaken by the government of Qatar to host the FIFA World Cup 2022.

He praised the grandeur of the football stadium and associated facilities, depicting the Qatari culture and identity, built in a short span of time.
Recalling the less than 100 days countdown of FIFA World Cup, the lrime minister wished the people and leadership of Qatar a resounding success in the convening of the mega event.

Besides underlining the important contribution of Pakistani workforce in building the world cup-related infrastructure, the prime minister expressed that Pakistanis were proud of the fact that the football, “Al-Rihla”, the official match ball of FIFA World Cup Qatar 2022, was a made-in-Pakistan product.