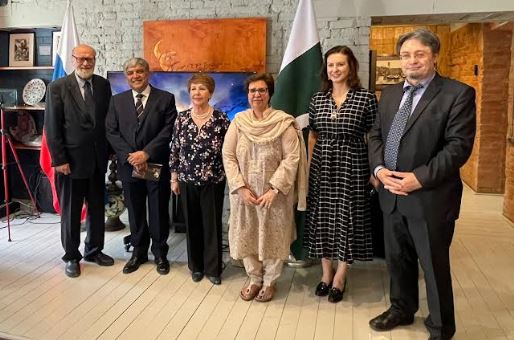 MOSCOW, JUN 22 /DNA/ – A book of poetry by Faiz Ahmad Faiz – one of the best known, the most venerated poet to have come from the Indo-Pakistan subcontinent over the last 70 years – has been launched at the Eastern Culture Centre at the Institute of Oriental Studies under the Russian Academy of Sciences on 22 June 2022.

The publication of the book coincides with the Diamond Jubilee of Pakistan’s Independence.The book has been published at Khudozhestevnnaya Literatura publishing house by the Embassy of Pakistan in Moscow in collaboration with the Institute of Oriental Studies. This book is unique because it comprises all the translations of Faiz Ahmed Faiz’s poems which have ever been published in Russian language.

Dr. Luydmila Vaseliyeva, one of the world-renewed specialists on Urdu poetry, compiled the volume. In his opening remarks, Ambassador of Pakistan to Russia, Mr. Shafqat Ali Khan said that Faiz’s poetry made a significant contribution to the emergence of mutual understanding between the peoples of Pakistan and Russia, and that the poet’s work found a special place in the hearts of Russian readers. He further added that the motivation for publishing this new volume was to highlight the literary connection between Pakistan and Russia.The Ambassador further noted that he himself has some connections with Faiz Ahmad Faiz. The first one is a family connection: the father of his wife, Dr. Aftab Ahmad, was part of Faiz’s circle of close friends. It was on Faiz’s advice that Dr. Aftab Ahmad gave his daughter the middle name “Madiha”.

The second connection is the love for Moscow. Faiz and his time in Moscow are a whole era in the history of Urdu poetry. Faiz wrote many poems in this city, which are considered his masterpieces. According to Mr. Shafqat Ali Khan, the friendships and empathy that surrounded Faiz in Moscow contributed to his poetic inspiration. The same generosity of spirit and warmth the Pakistani Ambassador experiences in his daily interactions Russians everywhere.Academician Vitaly Naumkin, Scientific Director and President of the Institute of Oriental Studies recalled his own meetings with Faiz, including within the framework of the Association of the Writes of Asia and Africa, where Faiz played an important role. He further noted that this book is step towards bringing Pakistan and Russia closer. Director of the Institute, Dr. Alikber Alikberov, noting that Urdu poetry has many layers of meaning, recited a Faiz’s poem devoted to Russian poet Aleksandr Pushkin.Dr. Lyudmila Vasilyeva said that this book launch ceremony is important in three dimensions: as an event in literature, oriental studies and international relations. She added that this book is unique, as it comprises different translations of the same poems, enabling the reader to deeply understand the depth of Urdu poetry. The book launch ceremony was attended by Pakistani diplomats, Russian scholars, journalists and friends of Pakistan.